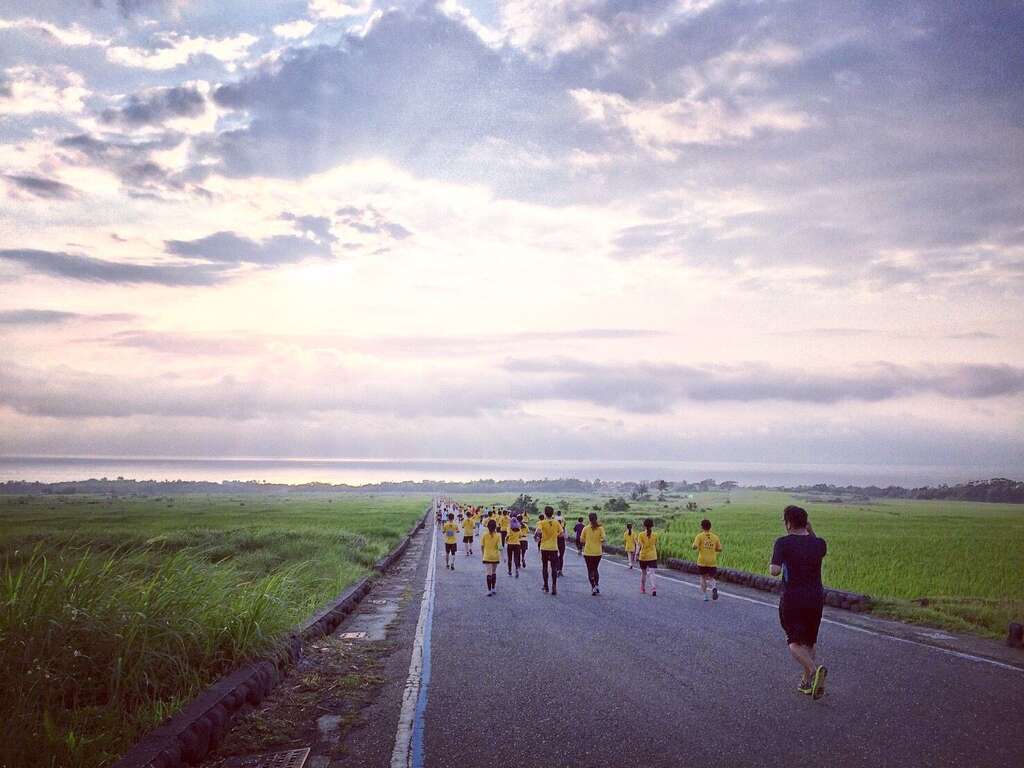 Run Along Grain Waves and Enjoy Views of Ocean Waves
Thousands of Runners Participated in Marathon Alongside Waves
On May 7th, the 2nd Changbin King Kong Marathon took off from Taitung’s Changbin Elementary School. The marathon this year attracted more than 1,900 marathon runners from Taiwan and around the world. Throughout the event, runners were able to enjoy the coastal views along the King Kong Boulevard while running. Lin, Wei-ling, Deputy Director of East Coast National Scenic Area (ECNSA) Headquarters; Wang, Kuo-cheng, Deputy Director of Tourism Department, Taitung County; and Pan, Shu-fang, Chief of Changbin Township, Taitung County, all came to the event to cheer on the runners. This year, the marathon was divided into a 42 km full marathon, a 21 km half marathon, and a 7.5 km fun run. The half marathon was joined by Yuri Chan, a native of Taitung and the fastest celebrity runner in Taiwan, China, Hong Kong and Macau. He acted as the lead runner leading all the runners to enjoy the east coast’s unique and breathtaking views: waves of two different sorts, ocean and grain waves.
Fastest Celebrity Runs Along
Uninterrupted Energy Charged
The marathon this year was divided into a 42 km full marathon, a 21km half marathon, and a 7.5 km fun run. The marathon course started from Changbin Elementary School. All runners immediately stepped onto the King Kong Boulevard once they turned at 3.2 km of the course. The fully ripe grains of rice along the boulevard and waves of the vast Pacific Ocean instantly came into sight. The runners then ran along Provincial Highway 11, passing by the east coast’s major attractions: Baxian Cave, Changhong Bridge, the Zhongyong tribe, and the Jingpu tribe. Having just beaten his personal best with 1 hr 28 min at the half marathon of 2017 Standard Chartered Hong Kong Marathon, Yuri Chan, the fastest celebrity in Taiwan, China, Hong Kong and Macau, also joined the 21 km half marathon in his hometown for the first time. This year, he managed to complete the marathon in 1 hr 42 min 21 sec, ranking third in his category. Since he had planned to enjoy the views along the course with ease, he said after the marathon that the fascinatingly beautiful views along the way did not let him down at all. He laughed and said that instead of waves of two different sorts, there were actually four sorts of waves: ocean waves, grain waves, heat waves, and mountain waves. The scorching hot sun in Taitung and challenging slopes increased the difficulty of the races. However, he was satisfied with his own performance. Meanwhile, coming back all the way from Germany, Chuang, Kei-te joined the half marathon during his holidays in Taiwan. He found the mountain and ocean views and fresh air relaxing and exhilarating, while the cheerleaders along the marathon course and sufficient supplement enriched the event. He planned to invite his German friends to join next time. This year, the final half marathon men’s champion, Lai, Jui-an (1 hr 32 min 00 sec), and women’s champion, Fang, Chiao-ling (1 hr 49 min 22 sec) both come from the same village in Hualien. They both proclaimed that they would not have won the championships if not for the cheering from the cheerleaders and the supplement provided by the staff.
Runners Have Fun at Pre-Party
Charged with Energy to Complete Marathon
On May 6th, the organizer, East Coast National Scenic Area Headquarters, especially held a pre-party with Changbin Township Office, Taitung County to cheer on the runners. At the party, 17 dishes of local delicacies were served and splendid stage performances were arranged so that runners could experience the hospitality of the local people. Runners could also experience local traditions and enjoy a short trip with ease, helping to promote tourism around Changbin Township. Everyone who joined the pre-party highly praised the diverse cuisines and the indigenous people’s vivacious welcome dance. The participants all had great fun at the party and said they would definitely join the marathon again next year.
Four King Kong Challenge Teamwork for Prize Money
In an effort to make the event more challenging, the marathon this year continued to hold the Four King Kong Challenge race. If more than four participants signed up together for the full marathon or half marathon, they were eligible for signing up for the challenge race. The 21 km half marathon and 42 km full marathon champion teams all came from Hualien: “Persistent Stable Runners 2” and “Hualien Ji’an Running Team A.” The two teams won gift vouchers worth NTD 12,000. In addition, the marathon was supported by a quality supplement along the course. After the marathon, all full and half marathon runners could take home Changbin Township’s local souvenirs as gifts for completing the marathon. Apart from the marathon, all runners were encouraged to relax in Changbin and enjoy a nice short trip there.