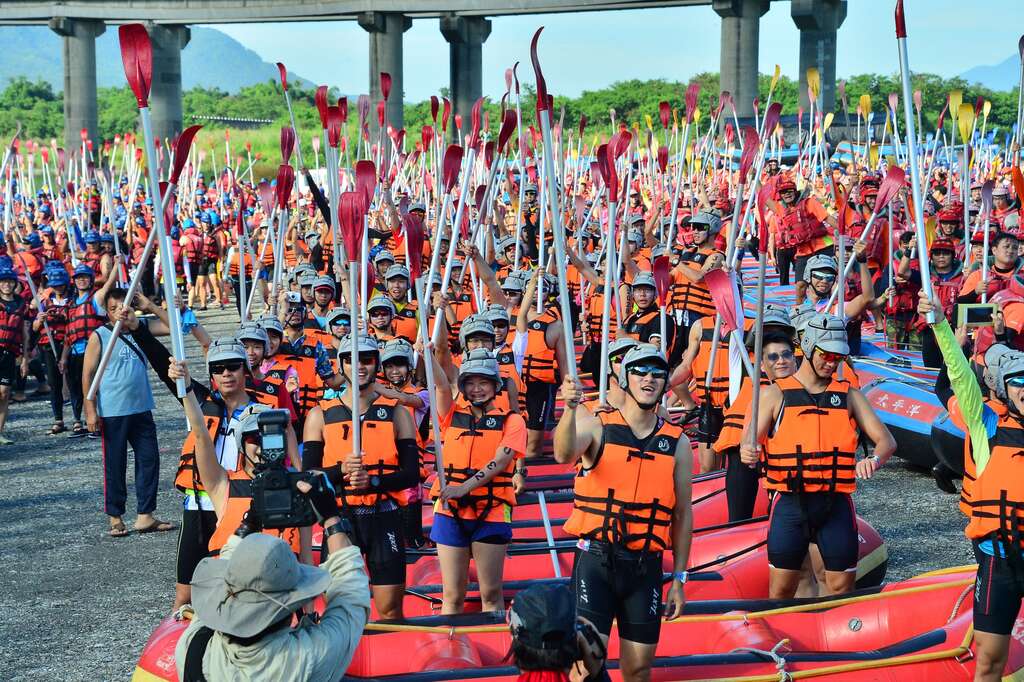 A Series of Fun Activities at the East Coast
Registration for Rafting Triathlon is Now Open
The “2017 International Xiuguluan River Rafting Triathlon” held by the East Coast National Scenic Area Headquarters, Tourism Bureau (hereinafter referred to as the ECNSA Headquarters) will begin at 6:30am on June 18, 2017 (Sunday) at the Xiuguluan River Visitor Center. The first rafting triathlon took place in 2000. This year marks the eighth anniversary of the event. Last year, the event attracted 1,300 participants. Apart from more and more people signing up for the triathlon, the event quality has also remained high. The triathlon last year achieved a score of 4.2 (out of 5) on Running BiJi. It is also Taiwan’s only triathlon that combines rafting, running and cycling.

The ECNSA Headquarters especially held a press conference today (18th) at the ground lobby of Tourism Bureau Tourist Service Center. Invited guests included Hsu, Chuan-sheng, Director of Eastern Taiwan Joint Services Center; Hsu, Chia-hua, Director of Legislator Hsiao Bi-Khim’s Office; Chen, Pei-jun from Ruisui Township Office of Hualien County; and Chiu, Hung-kuang, Board Director of Hualien County Ruisui Township Xiuguluan River Rafting Commercial Association. Hung, Dong-tau, Director of the CNSA Headquarters said that Eastern Taiwan prides itself on the sparkling sunshine, fresh air, and vast Pacific Ocean. The balmy surroundings are relaxing and soothing. Over the past few years, in addition to promoting sports, the triathlon has attempted to promote the tourism and culture of the east coast. Thanks to the event, Eastern Taiwan has been successfully shaped into the most popular tourist destination. This press conference intended to invite everyone to join this grand annual sports event on the east coast to enjoy the freshest air, while announcing that the registration for the triathlon has officially started.
Famous Triathlon Couple Aims to Win for the Second Year in a Row as the Level of Competition Increases
The event includes a triathlon race (rafting + running + cycling), a duathlon race (rafting + running), and a triathlon relay race. Athletes will have to complete three sequential stages of 67.6 km in total, including 11 km of rafting, 12.6 km of running, and 44 km of cycling, an enormous challenge for their physical and mental strength.

The triathlon race last year was highly competitive. Even Taiwan’s only Olympic windsurfing athlete Chang, Hao joined the race. In the end, the famous triathlon couple won both women’s and men’s championships with excellent scores; they are namely the low-profile champion Max Wu (3 hr 20 min 13 sec) and the lovely police officer Eva Hsieh (3 hr 40 min 53 sec). This year will be the fourth time the couple has joined the event. Max Wu said that he is good at both running and cycling. He also believes that his fellow athletes appointed by Waypoint will make a great team with him, and that together they will finish the rafting stage fast with high scores. In the meantime, police officer Eva Hsieh spoke highly of the greater fun of the event when compared with other triathlon races. While most triathlon races are for individual athletes, she is largely motivated to join this event multiple times because it allows athletes to work with their teammates.


The couple also kindly reminded all participating athletes of the importance of drinking enough water during the races as the sun is scorching hot on the east coast, and the key to great scores lies in sufficient water intake. The couple said with great confidence that they are both ready to win for the second time in a row to defend their women’s and men’s champion titles. The participation of Wu and Hsieh will lift the level of competition during the event, adding more challenges to the races.
Team Challenges Received Favorable Comments
Athletes are Invited to Form the Top Eight-Man Team
In an effort to continue the highly praised team challenges last year, the event this year invites athletes to form eight-man teams and work together to complete the races. The team challenges include a triathlon team challenge and a duathlon team challenge. Apart from instilling the teamwork spirit of rafting into the races, the team challenges encourage athletes signing up for team challenges to work together and fight for the prize money. In addition to a group discount on registration, the champion team will take home NTD 5,000. The event hopes to evoke the teamwork spirit of all participating teams and drive them to set new records during the event.

Registration is available from now until May 19th (Friday). All athletes are welcome!