The East Coast has various vegetation zonesfrom the sub-arctic mountains over 3000meters above sea level to tropical coasts.Various zones such as coniferousforests, coniferous broad-leavedmixed forests, deciduous forests,tropical rain forests, coastalforests, and other coastalflora are also equally distributed. Theyinclude almostall types ofplants. The tropical rain forest on both sides of the Xiuguluan River, the thorn forests of Xibulan Island and the coral reef vegetation of Shitiping, Sanxiantai and Little Yeliu are all precious ecological landscapes. Among them, the Xiuguluan River tropical rain forest has been relatively well-preserved and is extra valuable because it is the only remaining tropical rain forest inTaiwan aside from Wulai, Hengchun, and Orchid Island. 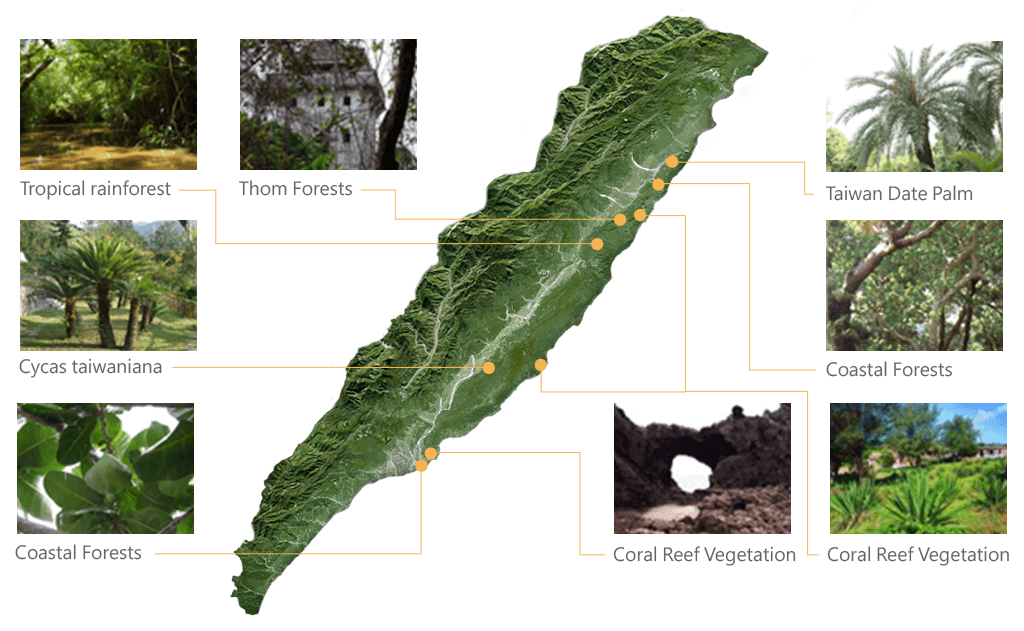 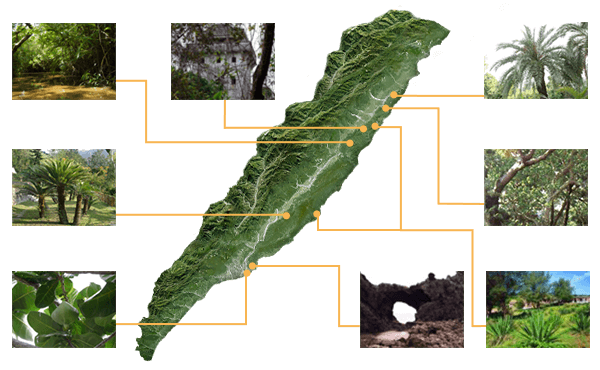 Home to Many Wild Animals 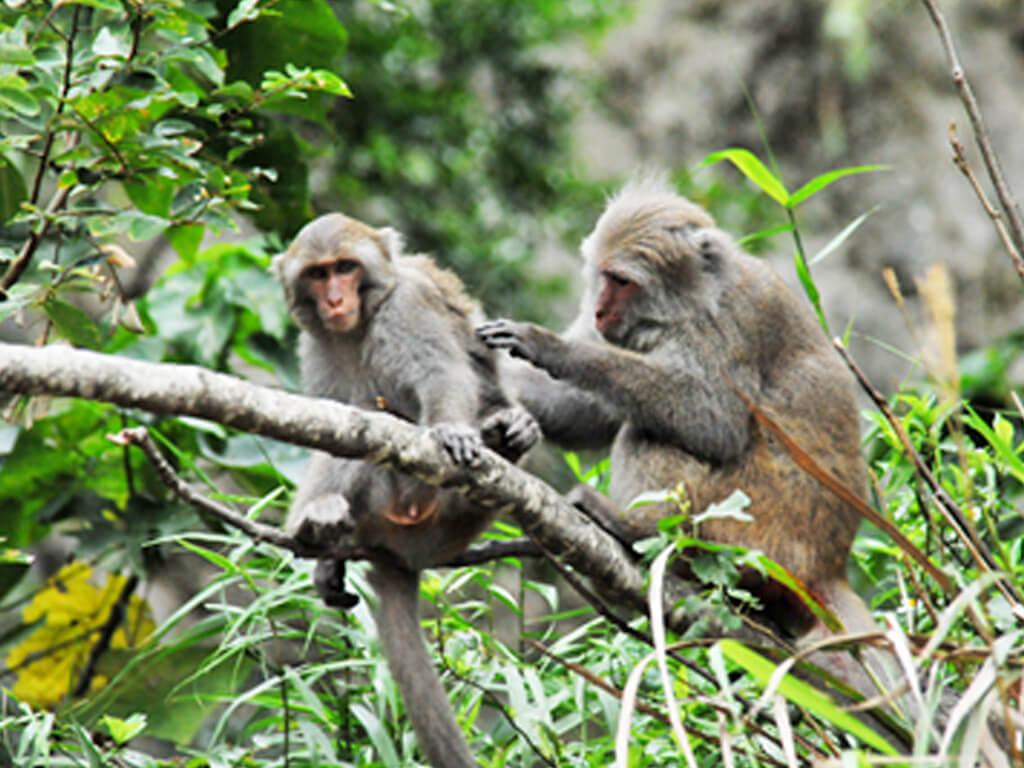 The less-developed eastern Taiwan has quite a complex habitat for wildlife. It is, therefore, home to much of Taiwan's wildlife. According to a recent survey, there are more than 20 species of mammals to be found on the East Coast. Among them, six are unique to Taiwan, including the Taiwan macaque, the small yellow-bellied mouse and the Zijian mouse. Taiwan macaques are especially representative of Taiwanese wildlife. They are also the easiest to observe. The Taiyuan River valley in Taitung is well-known habitat for Taiwan macaques. There are often groups of macaques in these woods, especially during nocturnal feeding time. 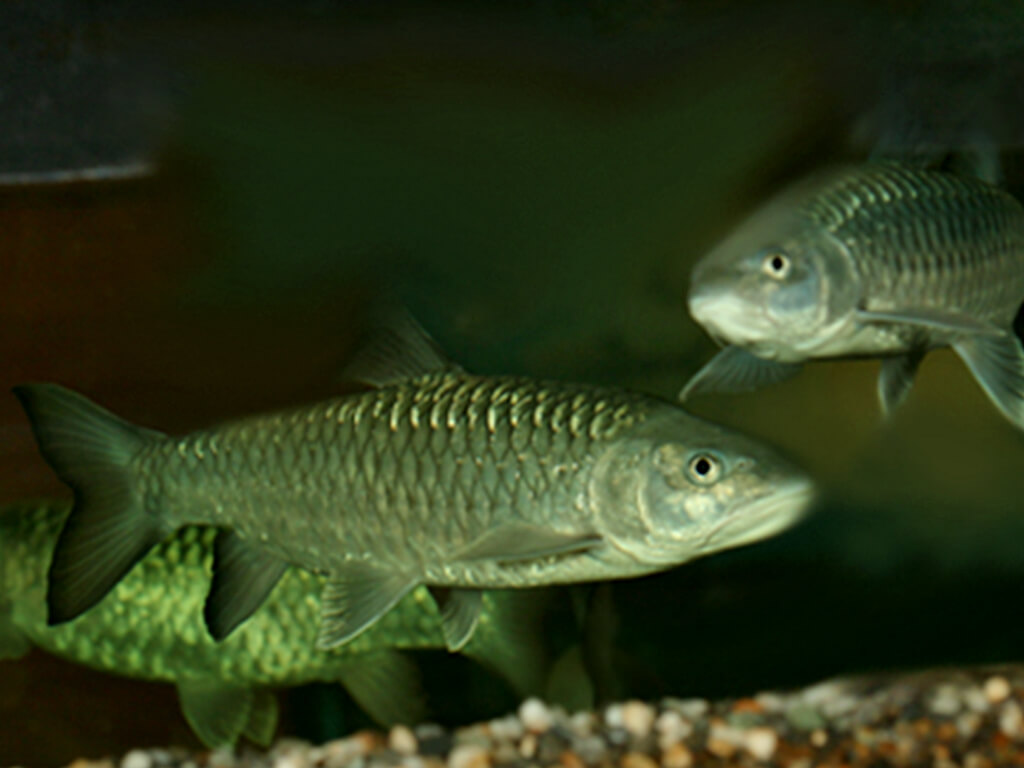 Some of the fish that are endemic to Taiwan include the tall-bodied shovel-jaw fish, ho-spine fish and Kikuchi's small carp. Every year from March to August, there is the fish migration in the Xiuguluan River. The wonder in this event is comparable to the famous salmon runs in the temperate zones. It is considered one of the world's premier subtropical river migrations. It starts in the spring each year, one after another, millions of fish come from the Pacific Ocean and swim into the Xiuguluan River for their fantastic run. 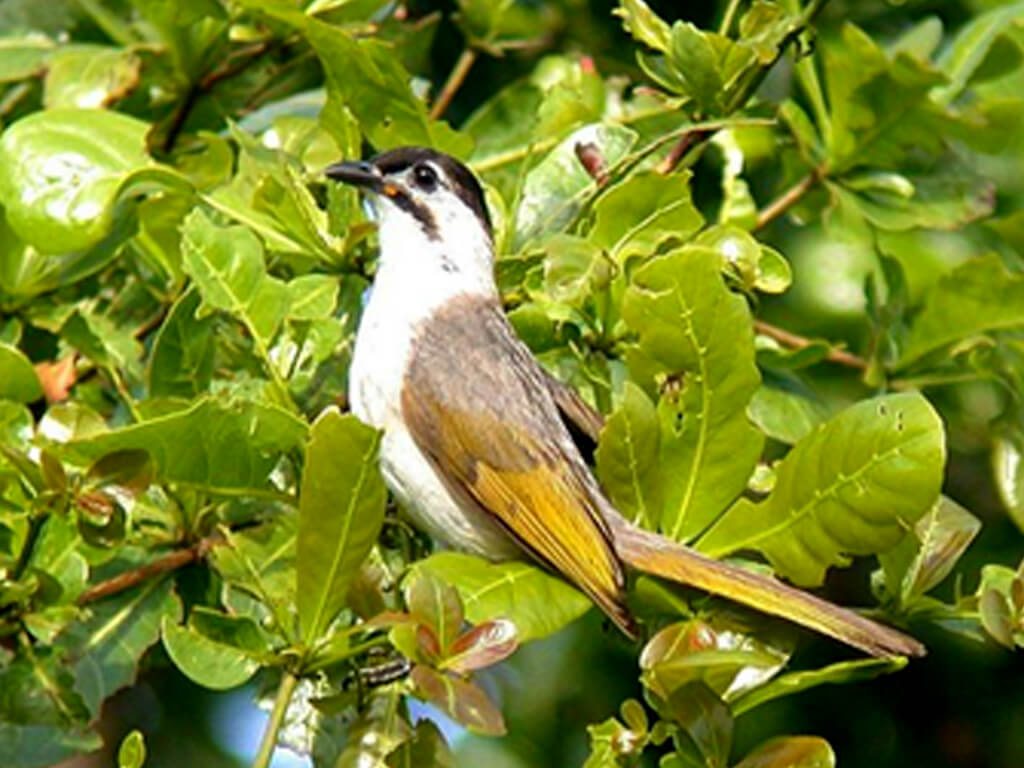 There are nearly 150 species of birds on the East Coast alone. With rich bird resources and a relatively undisturbed landscape, it is a true paradise for bird-watchers. The Wild Bird Association of Taiwan has carefully planned out the thirteen bird-watching routes. There are many migratory and resident bird as well as various different species on the Xiuguluan River and along the Ma Wu Cave Creek Valley. The bird that most represents the area is an endemic species of Taiwan — the Black-headed Bulbul, which can only be found on the east of Taiwan and in Hengchun. The black-headed and white-headed Bulbul found on the west coast of Taiwan demonstrates a wonderful example of geographical segregation. 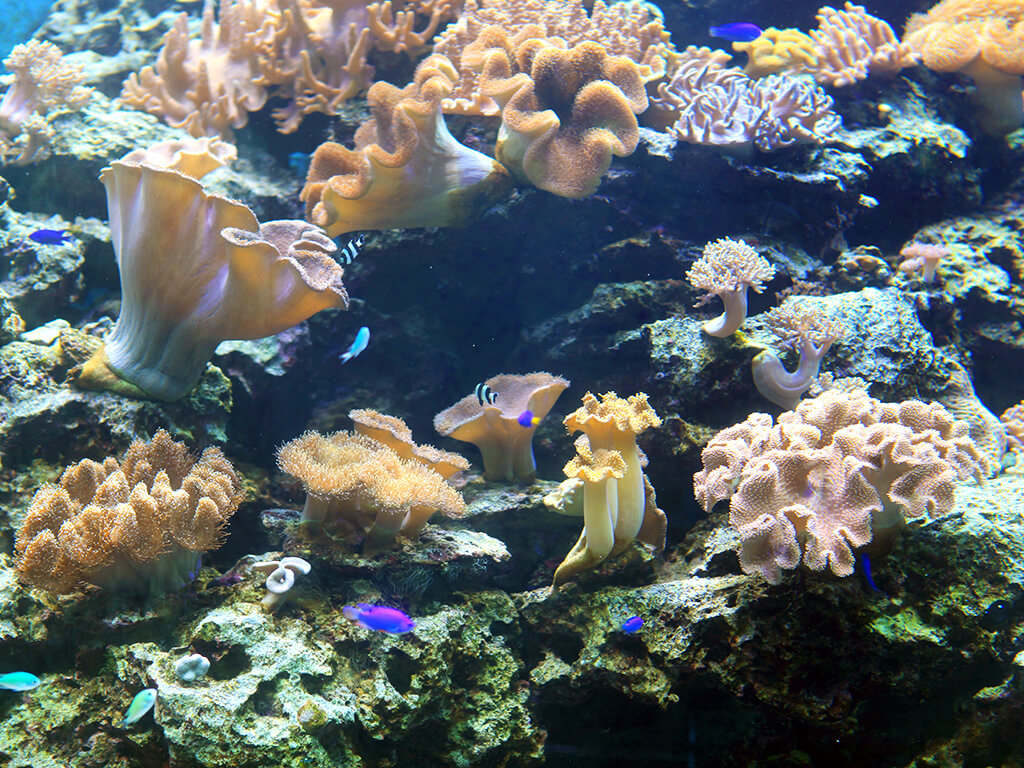 The Diversity of Coastal Life, Eco-Tourism

Coastal wildlife refers to all life that thrives in the intertidal zone of the coast. In order to adapt to the dramatic changes of habitat at low tide, these creatures has developed different shape and structure in the long process of evolution. The abundant biological of species on the coast shaped a colorful world of seashore. The East Coast has various coastal landscapes and environments, such as river mouths, sandy beaches, gravel beaches, reefs and other coastal terrains, in them therehabitat great amount of diverse creatures. According to survey, there are more than 50 large-scale algae, more than 140 kinds of shellfish, more than 60 kinds of coral, more than 130 intertidal fish, and hundreds of other crustaceans, polychaetes, echinoderms have been found. There are forests of coral around Green Island, Shitiping, Sanxiantai and Fugang Geopark (Xiaoyeliu), where they gather all sorts of tropical fish and a variety amount of invertebrates. Thus, these areas become paradise for diving. Green Island in particular has than 220 different kinds of coral species , the specie diversity in which is incomparable to the same type of island in the world.

The sandy coastline in the area is steeper, the sediment is unstable and has relative narrow inter-tidal zone. Only a few animals can survive and live in these areas. The creatures, which make their home on the sandy shores, are usually hidden and difficult to find. Animals such as sand crabs live in caves near the high tide line. They come out and feed at night. They are agile, and often dig holes in the sand that result in a distribution of tiny sand balls. They shape the sand like pebbles and often feed out of the hole when waves come in. Bivalves are also an animal commonly seen in the sand. They have gills and live on water plankton. 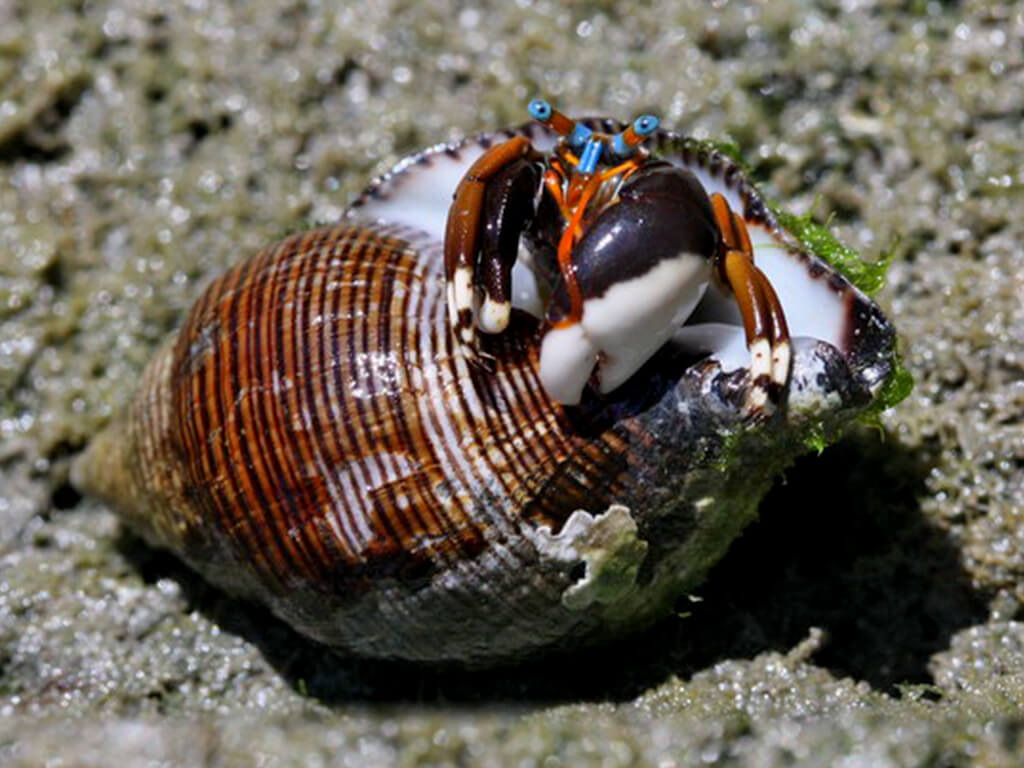 The gravel on the coast is often washed by waves and kept rolling all the time. Due to the push of the waves, they often change shapes during accumulation. Gravel is not typically a suitable environment for creatures to settle. Animals that can be found on rolling gravel often have special survival skills. For example, brittle stars will cut off their brachiopods to escape dangerous situations between rolling rocks; hermit crabs use their hard, spiral shells to protect themselves; shrimp and stone crabs will often lose limbs when they are shelling, but they have the ability to regenerate appendages. 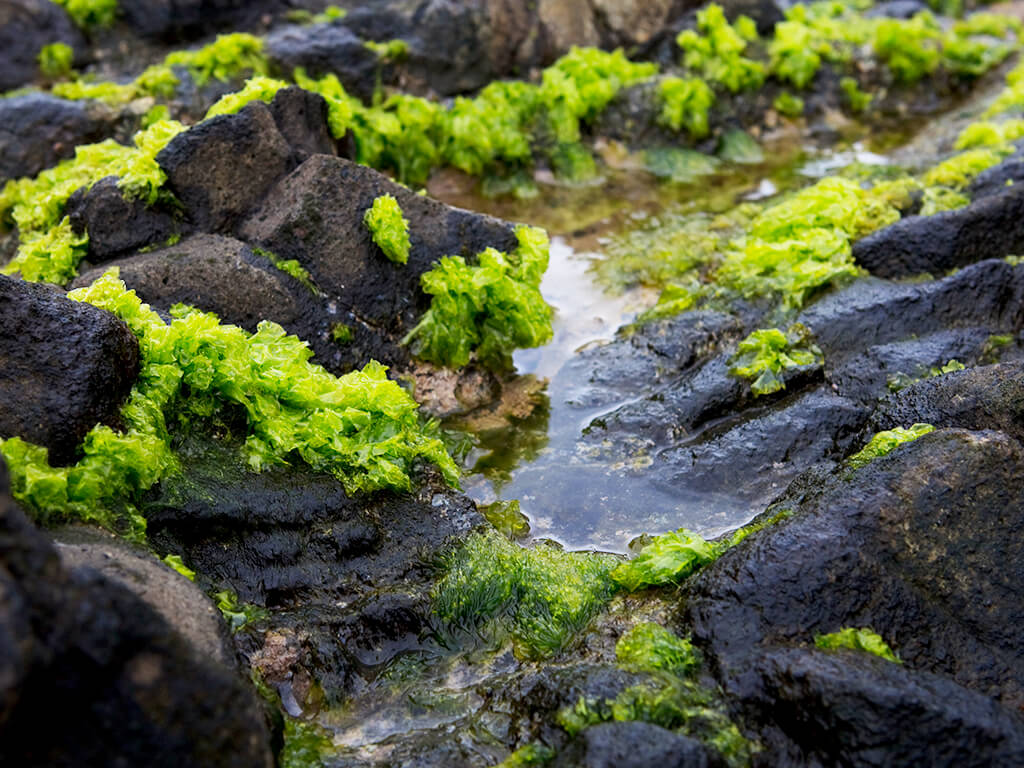 There are often many holes in the reefs providing a stellar habitat for sea animals. The number of species in the reefs are plentiful. Some of the large algae are more tolerant to drought and can survive in drier areas near the high tide line. Some of them breathe in the ocean calcium and deposit it in their bodies to enhance their hardness in order to resist strong currents. They reduce their organic matter ratio to prevent themselves from being eaten by other animals. These strong algae are a lot like cacti. Animals that live near the high tide line, have stronger adsorption ability to resist the shock from water and predators. For example: the corn spiral shell.