A Diverse and Complex Culture Rich and Abundant Archeological Sites

Taiwan happens to be located in a geological handover zone between the mainland and marine plates, the terrain changed dramatically when the rivers and mountains separated. Ancient people came to Taiwan from different places, at different times, and from different environments to build their own lives here. They have maintained and developed their own cultures. The easternmost edge of Taiwan's east coast, the land bordering the Pacific, is a narrow strip. On that narrow strip many prehistoric sites can be found. There are 40 to 50 sites that have been discovered, most of them located in the coastal terraces. After long-term research, archaeologists have discovered that prehistoric culture on East Coast emerged about 50,000 years ago, and continued to develop until 200 to 300 years ago. The cultures emerged during the Paleolithic Era, the late Neolithic Age and the Iron Age. Each stage of development has left a large number of different sites. These discoveries have left anthropologists with a rich base of research data for Taiwan’s prehistoric cultures. According to their different ages and natures, the cultures can be divided into several categories: Changbin Culture, Jomon Pottery Culture, Kirin, Beinan Culture and Ami Culture. 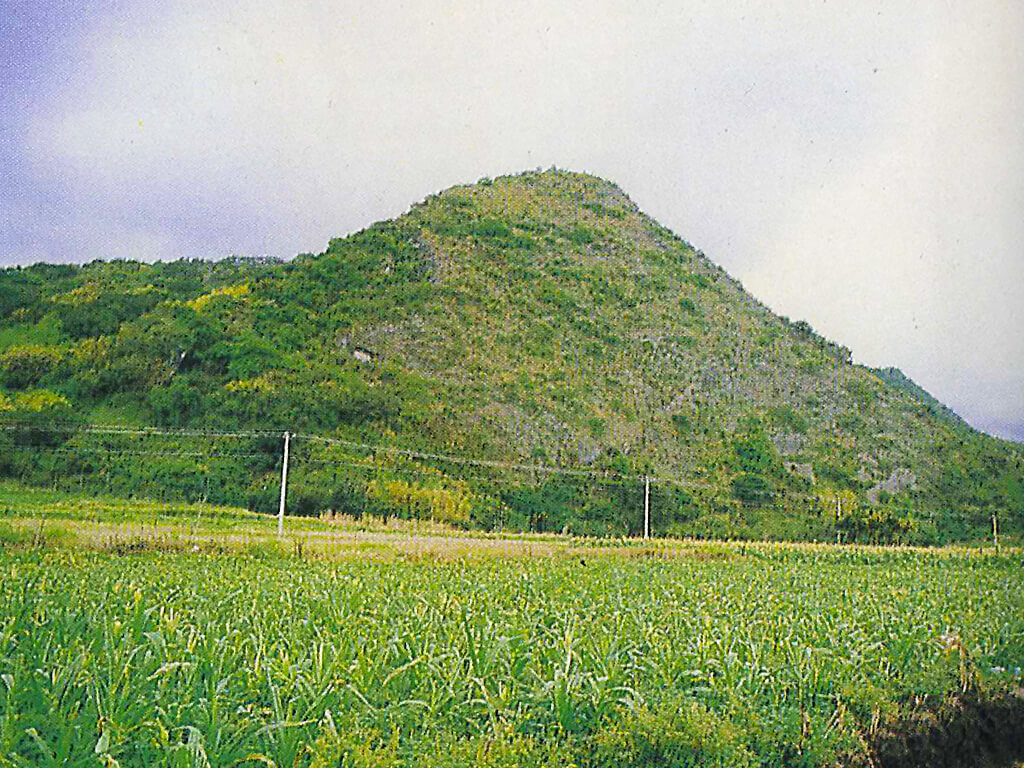 Changbin culture has been dated to about 10,000 years ago, there are two representative sites; one is at Baxiandong in Changbin Township, the other is Xiaoma in Chenggong Township. Baxiandong is located in Changbin Township, about two kilometers south of Zhangyuan Village. There are dozens of sea caves of different heights around here. It is believed that the prehistoric people used the caves as their home. From 1968 to 1980, anthropology professors and students from National Taiwan University came to do research and found a large number of cultural artifacts. Xiaoma Cave is located about 400 meters north of Donghe, the site on is a limestone hill at the foot of a mountain. In 1988, a National Taiwan University archaeological team found some tools and a tomb that belonged to a member of the Changbin Culture about one meter underground. The position of the corpse in the grave appeared to be a full squat or sitting position. It is the oldest tomb ever discovered in Taiwan. Changbin Culture was inherited from Paleolithic cultural traditions. People fished and hunted. There was no agriculture or pottery. All stone tools were chipped instead of polished. 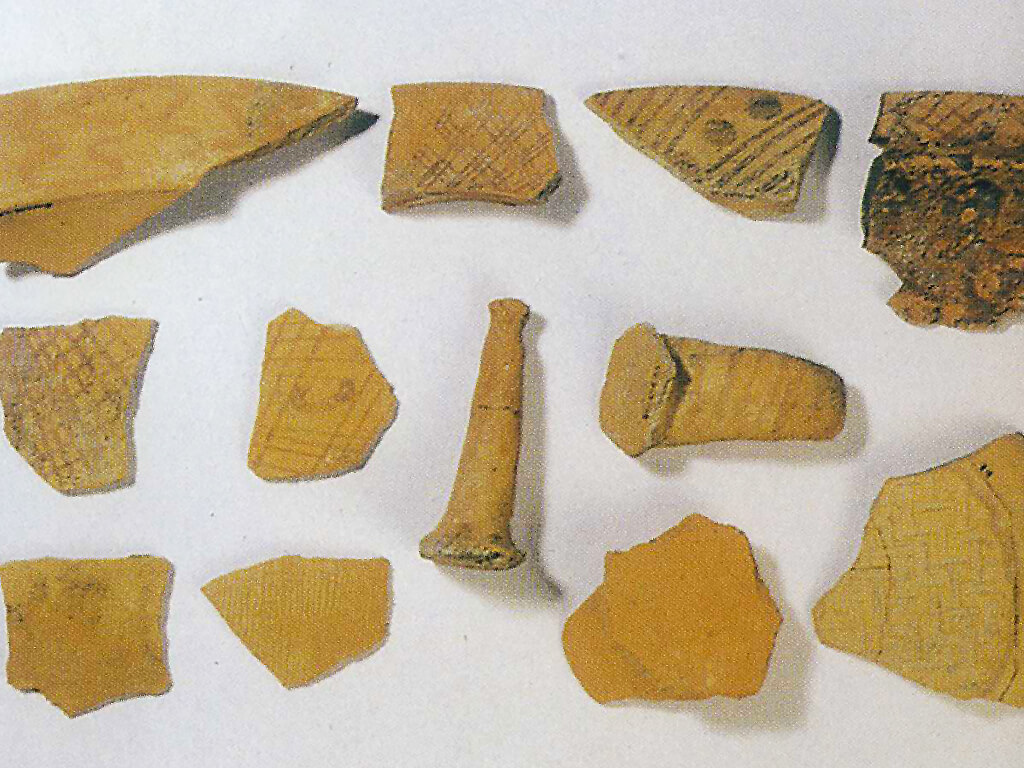 The Jomon Pottery Culture emerged during the early Neolithic Age, approximately 4,000 years ago. This culture was not only found in the East Coast, but also in the west. The sites found in Hualien and Taitung are: Beinan, Lao Fan She, Chihang, Fushan, Yuchiao, Fengbin, Yanliao and Daken. The Jomon culture was famous for its characteristic red-brown pottery. Jomon pottery is identified by its rolling patterns. Some are crude, while others have more refined patterns. The shape of the pottery is mainly in the form of pots, bowls and bottles. Spinning wheels and ceramic rings have also been found. Tools for hunting include chipped stone axes, polished stone axes, chisels, spears, pestles, arrowheads and cones. From the available information, we can assume that there was already the development of agriculture. 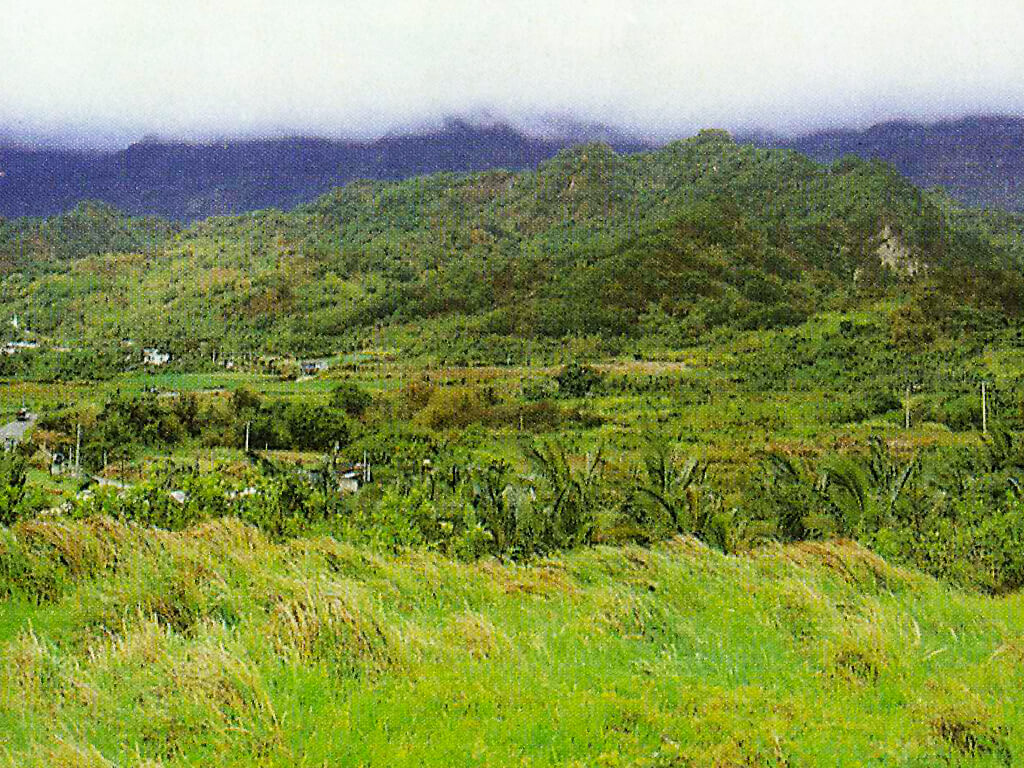 About 3000 ~ 4000 years ago, there appeared the Kirin Culture (also known as Giant Stone Culture) with giant stone groups on the East Coast. culture, or rock culture. Kirin many cultural sites are mainly distributed in the coastal terraces facing the Pacific, except for a few found in East Rift Valley. The major sites are, Fang-Liao, Shin-She, Feng-Bin, Jung-Yong, Kirin, Dong-He, Taiyuan, Doulan and so on. One of the sites, Kirin, is located on the small hill northwest of Southern Kirin Tribe in Cheng-Gong Township. In 1967, the site has systematic excavations made, a lot of giant stones, pottery and stone tools appeared in the cultural layer. The main feature of the Kirin culture is the groups of the giant carved stones, including the single standing stones, stone wheels, portraits, stone coffins, stone walls, boulders and stone strips. Most of the single stones found on a site appear in rows suggesting that they may be related to religious rituals or architecture related reasons. 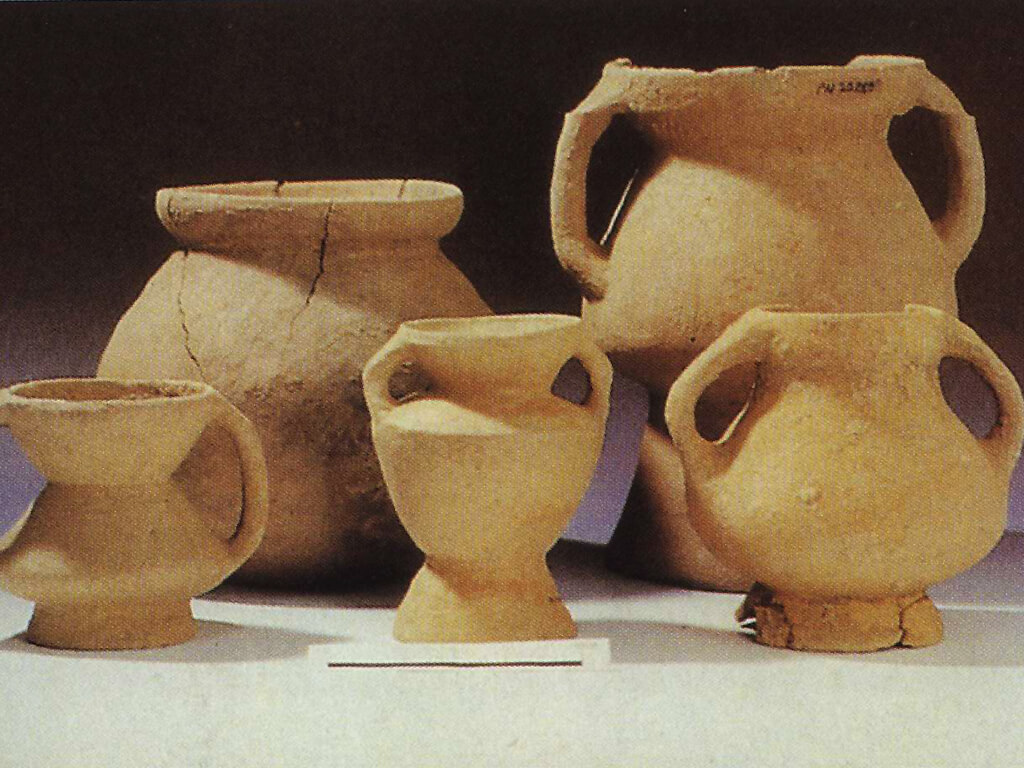 Beinan Culture (aka Puyuma Culture) developed about 2000 to 4000 years ago, it was another Neolithic culture on the East Coast. The Beinan Culture was found in the south of the Kirin people on the East Coast but with some overlapping areas. Some major Beinan sites include Beinan, Lao Fang She, Liyu Mountain, Donghe and Taiyuan. The most important Beinan site is Beinan, which is located on the south bank of Beinan River in the delta plain in Taitung. Since 1970, excavations have unearthed a large number of artifacts, stone sarcophagi and architectural monuments. It is a large site with many ruins. One of the main features of Beinan culture was the stone coffins. Thousands of the stone coffins were found at the Beinan site with a large amount of funerary offerings. In addition to a wide variety of pottery and stone tools, a huge amount of jade and stone ornaments were found. Most of them were found in the sarcophagi as funerary offerings.

The Amis Culture is the last of the prehistoric cultures on the East Coast. The cultural sites can be found at Jingpu and Shuilian, suggesting that the culture may have been passed down by Amis ancestors. The culture features red sand pottery, such as cans, pots and bowls. Some have been crafted with handles, and some are equipped with a wide button. In addition, lots of pottery legs have been found. The shape of ancient Amis pottery and contemporary Amis pottery share many similarities. Stone tools are mainly chipped stone axes. Other artifacts found include pestles and hammers. There seems to be no differences between the stone pestle found at the site and later Amis stone pestles.

Story of the Coastal People

The narrow coastal terrace east of the Coastal Mountains is an area of agricultural concentration but only the Doulan and Chenggong areas show dramatic changes in elevation and have wider land. These narrow coastal terraces were the spaces for settlements and paddy fields. The area carries in succession the various ethnic groups of the East Coast. Before the Mudan Incident in 1874, Amis people came for water and land, there were also the Siraya people who were displaced from southwestern Taiwan because of land occupation by Taiwanese and Hakka people who came here looking for a new home.Some Taiwanese people came from Yilan to Chengguangao, which is the East Coast's first natural harbor engaging in business and trade. During a 200-year period, many people flocked to the East Coast in the area between the mountains and the sea. The East Coast has been home to many interesting and memorable people and events.

The statue of Kafo‘ok, the leader of the Amis people during the Da Gangkou Incident. photo by Lee Yu-feng

Ami can be said to be the earliest residents on the East Coast. In 1721, in order to avoid the Bunun tribe, which was moving east, and other tribes such as Saisiyat, and Taroko, the Amis and other tribes formed their own geographical isolation areas, including Hengchun, Beinan, Xiuguluan and Nan-Shi. Between 1877 and 1878, the Dagangkou Incident occurred in which the Qing army trapped more than 160 Amis youths, causing the Amis to migrate to the south for shelter. Later, the Amis in the south established dozens of smaller Amis tribes. 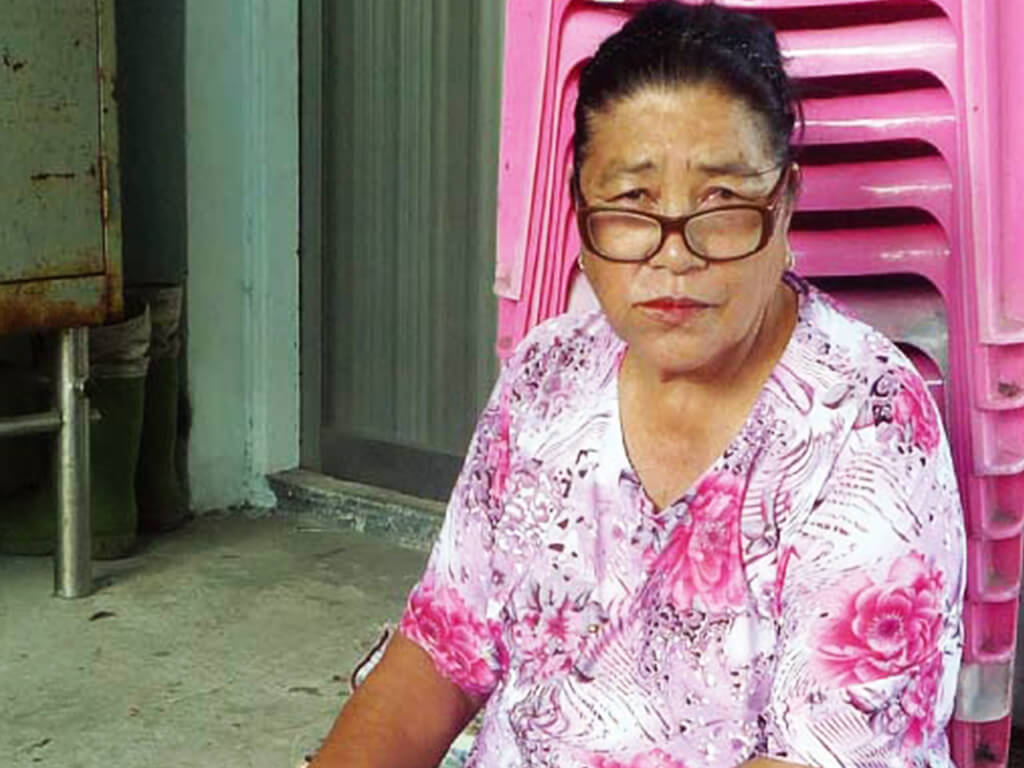 In 1878, there was the outbreak of the Chialiwan Incident on the Qilai Plain. At the time, the Chialiwan Kavalan people from Yilan and the Jinlaoye Sakiazya people from Hualien both suffered from the harassment of the Qing army and were forced to move. Since then, the Coastal Range to the east has been settled by the Kavalan people and the Sakiazya people. The Kavalan mainly live within the Xin-She tribe in Fengbin Township while the Sakizaya people are mainly distributed in Ciwidian in Shoufeng Township and Jiqi in Fengbin Township.

The first Bunun person to enter the Nan River. Photo by Li Yu-fen

The Bunun tribe followed the traces of wild boars across the Rift Valley in 1947 to the East Coastal Range. Since then, their famous eight-part harmony songs have been heard from the Nanxi tribe in Changbin township. 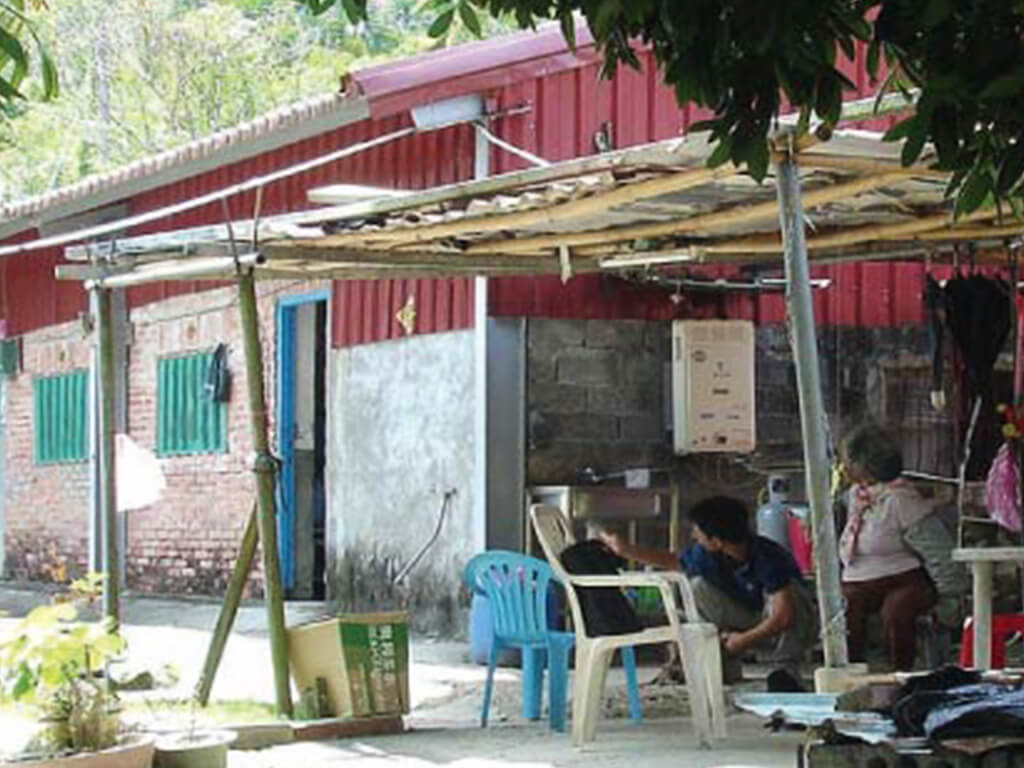 Since 1965, the Veteran Affairs Commission has been settling veterans who helped establish this country along the East Coast in places such as Tai-Lai Farm in the north to Donghe Farm to the South. Those who served in the Coastal Defense Department also came east to spend the rest of their lives. 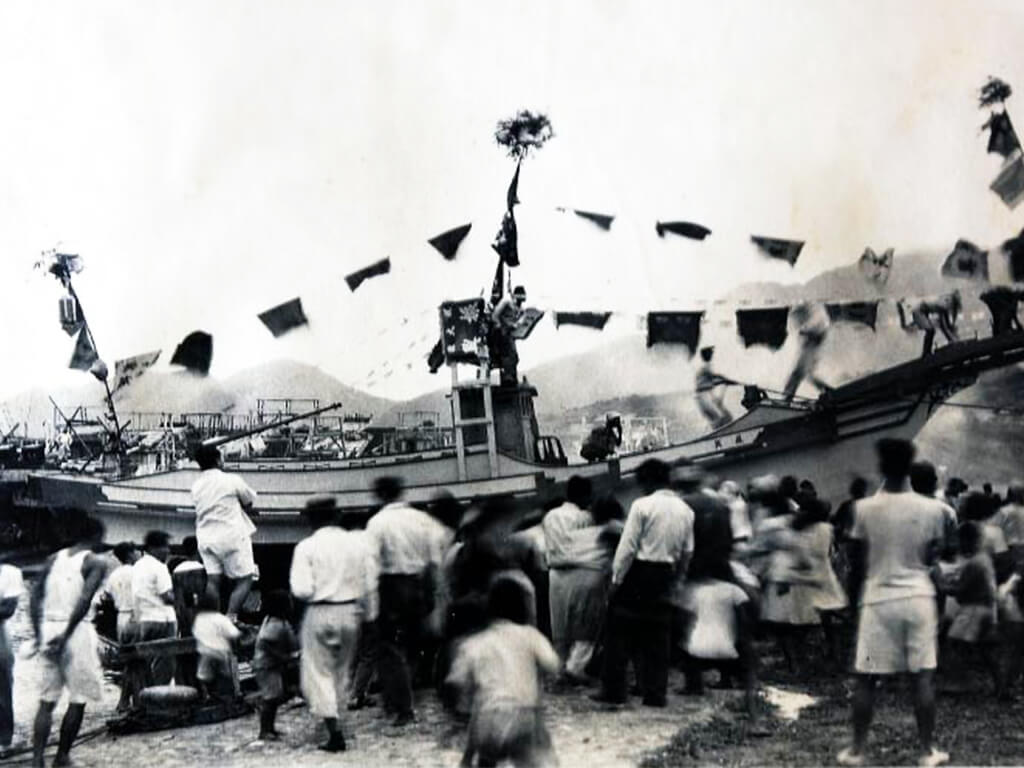 In 1895, the Japanese government established themselves in eastern Taiwan. They fueled economic production, logging businesses, mountains reclamations and harbors. Therefore Hakka, Minnan people and fishermen from Hengchun, Green Island and Japan came to the east coast to farm and do business. 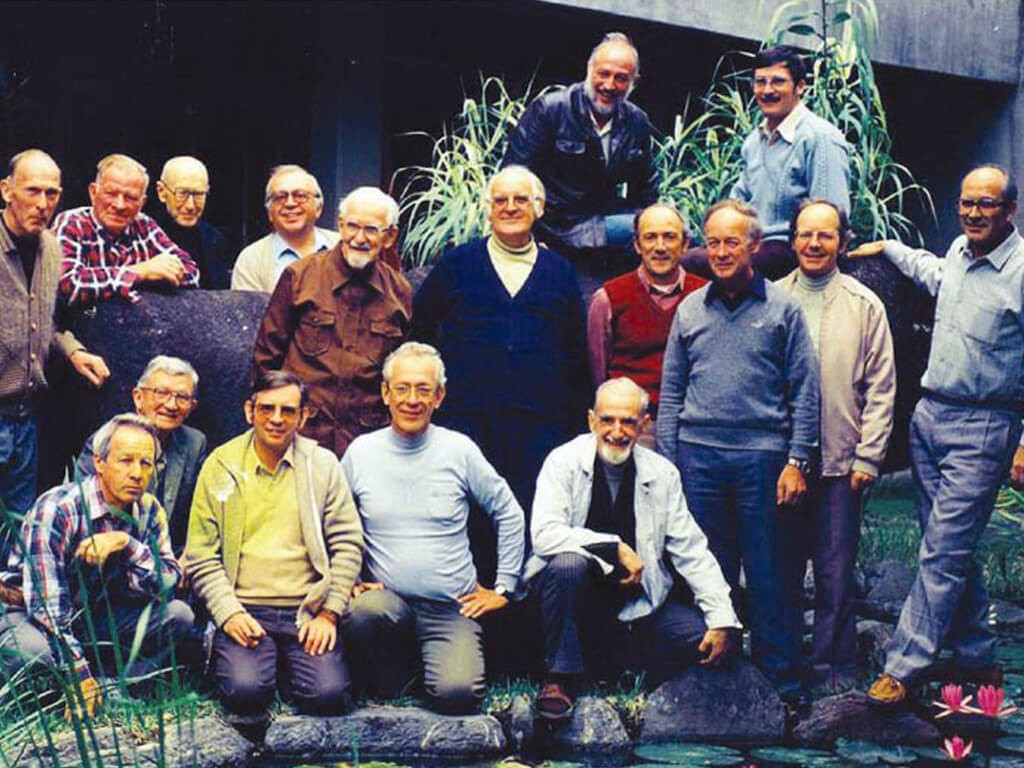 1953, Bethlehem Fellows came to the Amis tribe. The white Catholic churches that contrast against the blue Pacific Ocean have become a common site along the coast.

The mountain gate of the Sea God Temple at the entrance on Xincun Road. Photo by Li Yu-fen 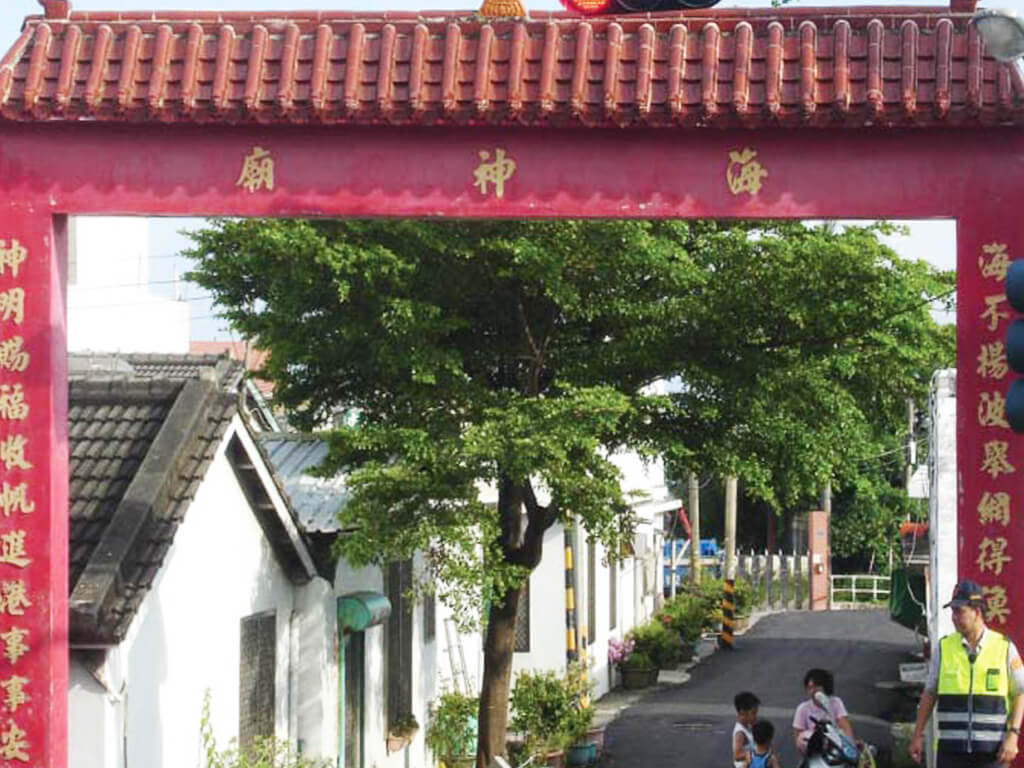 At the height of Civil War paranoia in1955, many islanders followed the army and withdrew to Taiwan. More than 400 displaced mainland Chinese who spoke the Minnan dialect were placed in Fugang, a fishing town, to make a living. Fu-Gong later became famous on the East Coast for being a veteran village.