The The ocean off East Coast is dominated by the Black Current. Its range is wide and the migratory and endemic fish resources are abundant. Fish resources brought by the Black Current are the lifeblood of the east Taiwan fishing industry. It offers a great opportunity for seafood lovers. Shitiping in Fengbin Township is teeming with flying fish, swordfish and dorado while Chenggong Township in Taitung is famous for swordfish, tuna, dorado, fin fish, dried cod, and abalone which are usually found in fish farms. Among the fish, the swordfish is the most popular. It is fresh and delicious and is always a favorite of seafood lovers. In addition to fish, Donghe Township in Taitung also produces Buddha fruit, big white pomelos and Wentan pomelos. It is often described as the Township of Fruit. 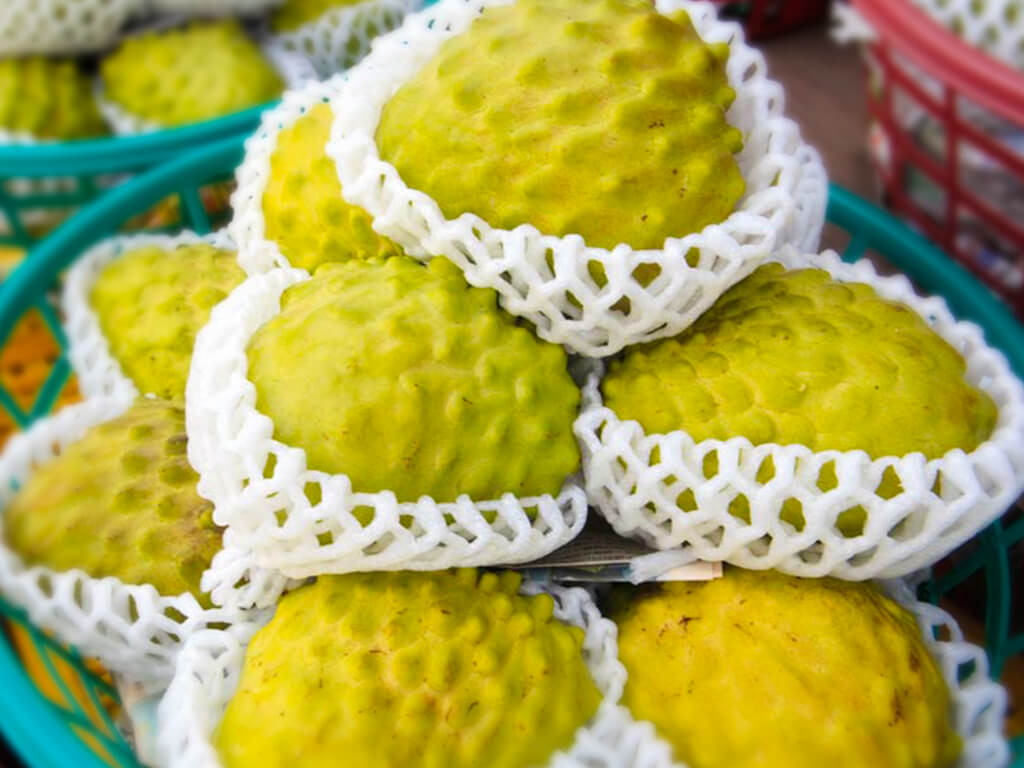 Buddha Fruit is also called sweetsop. The Budda fruit grown in Taitung is 2-3 times bigger than that grown in other areas. The growing season is from July to March. At harvest time, both sides of major roads are filled with Buddha Fruit vendors. This fruit has a sweet honey taste, and is soft and chewy in texture. Ice cream is also made from it. 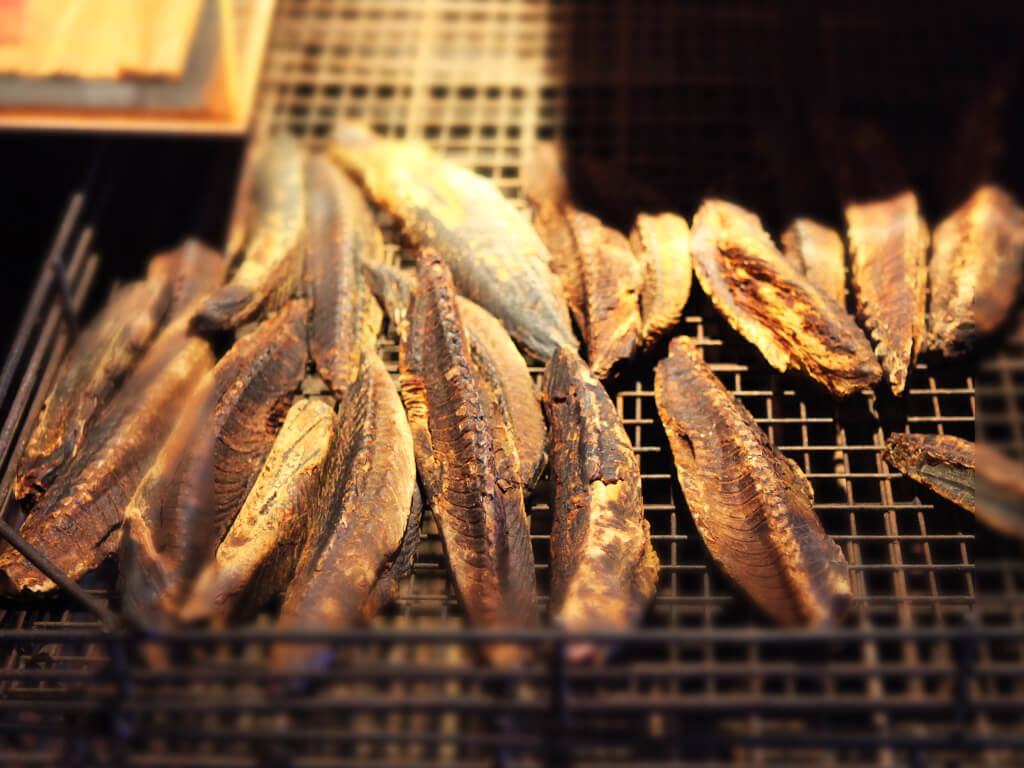 The Kuroshio Current gives the fishing port at Chenggong a rich variety of products, such as sailfish, tuna, and skipjack tuna, to name a few. Bonito is made from tuna after processing. It is the most successful of the port’s specialties. 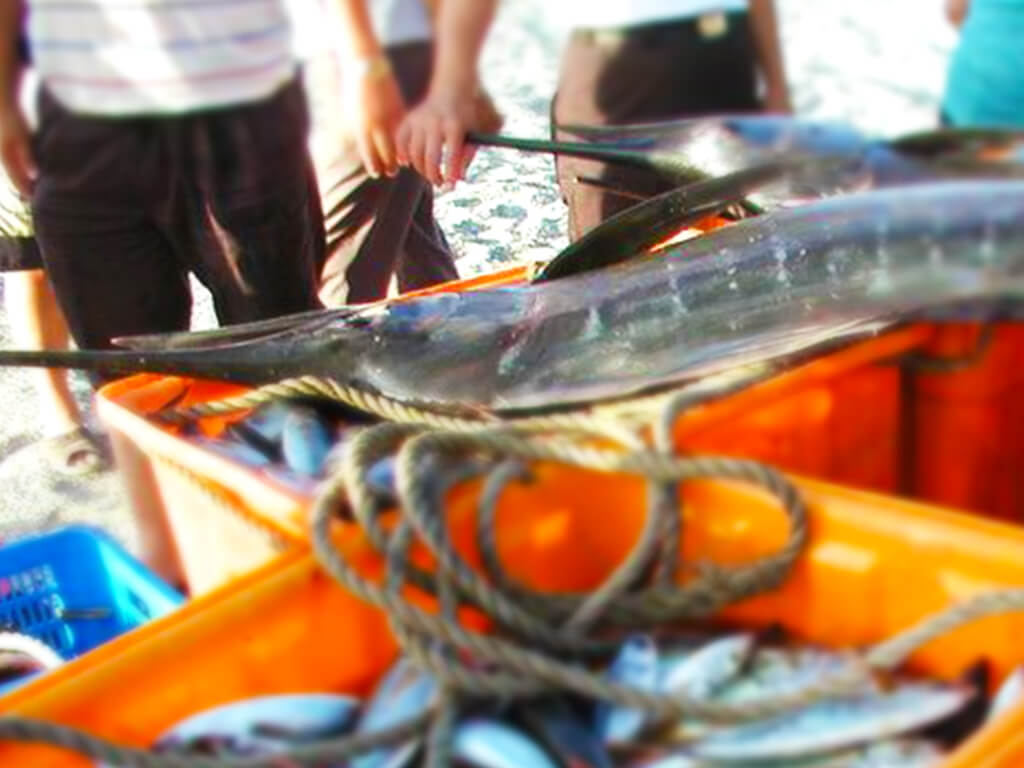 Sailfish are also called Marlin. This is a general term for large predator fish, and they are found in all oceans. September, when the northeastern trade winds blow, is the high season for sailfish. Chenggong is the best place for sailfish in Taitung County. Chenggong has held an annual sailfish festival in recent years and its sailfish dishes are highly recommended. 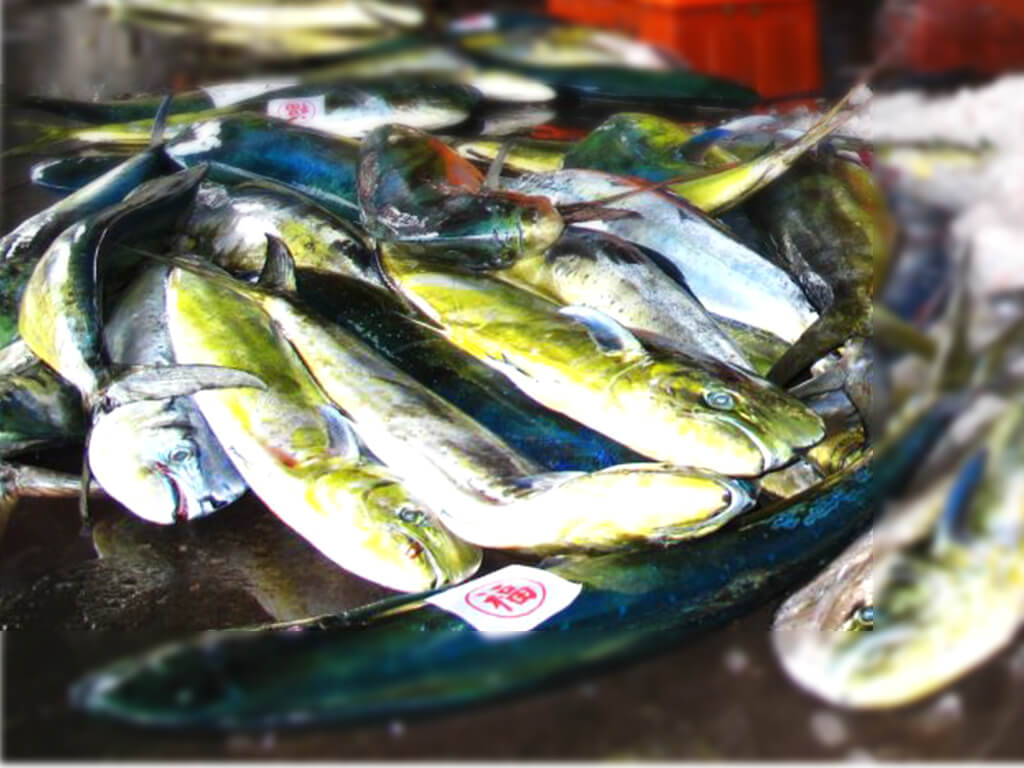 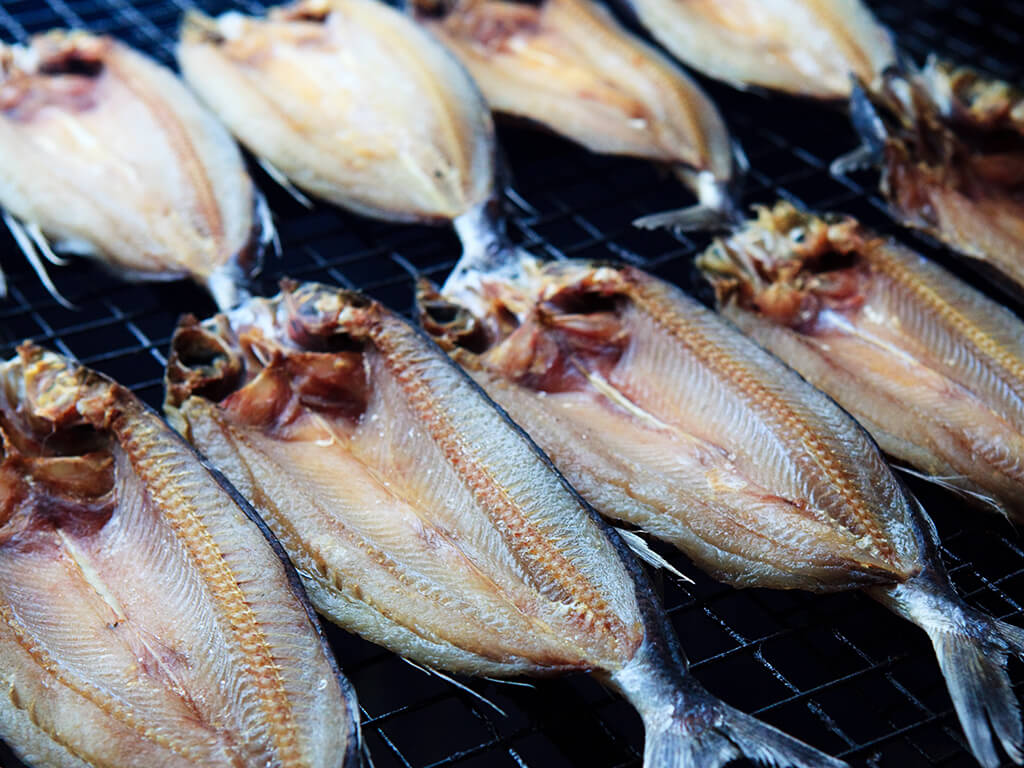 Flying fish are a migratory species that lives near the surface of warm oceans. In spring, the flying fish follow the Kuroshio Current to the north. They provide an important food source for the whole year for the Tao tribe which inhabits Lanyu (Orchid Island), off of Taitung County, and holds a similar position with the Amis tribe. Fishermen row out at night and light a lamp, and this attracts the flying fish. Sometimes, they even jump onto the deck of the fishing boat. A fisherman can easily catch a large amount of fish in one night. This is the gift that the Kuroshio Current has given to the Tao and the Amis. 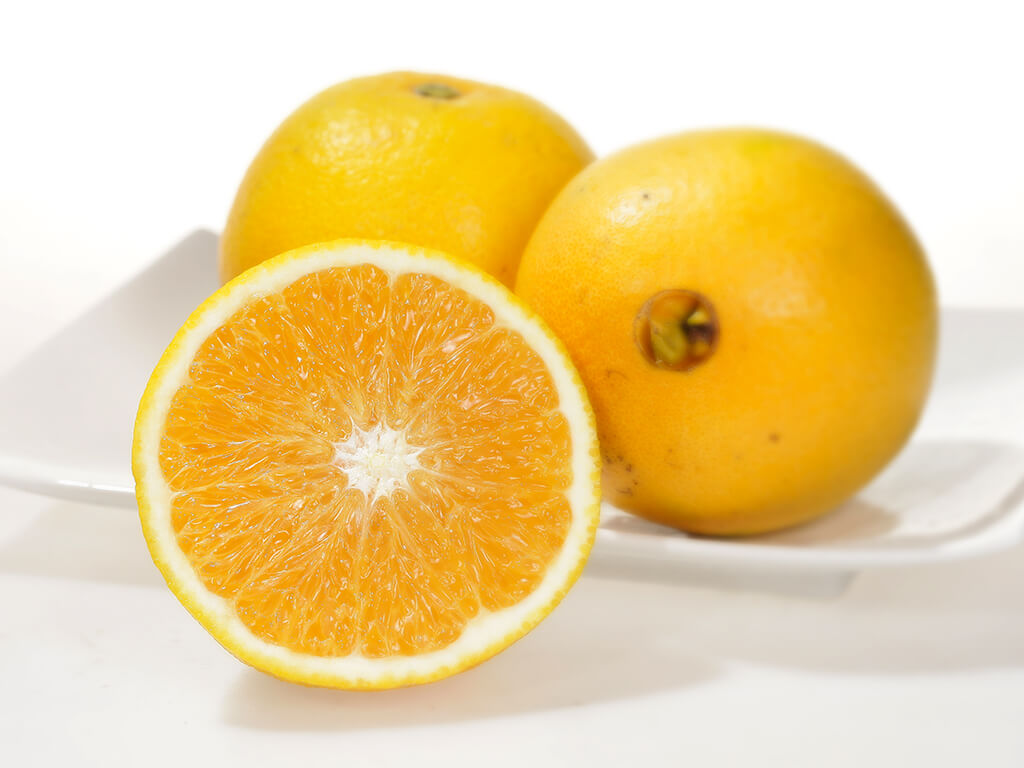 Because of special geographical and climatic conditions, Chenggong Township in Taitung County grows the famous Sanxiantai navel orange from November through January each year. It is called a navel orange mainly because this particular fruit has a mark that looks just like a person’s belly button. Navel oranges have no seeds in them, are slightly larger than normal oranges and about twice as big as a tangerine. It has a delicate texture, moderate sweetness and sourness and always leaves a great impression on those who taste it. It often regarded a one of the tastiest among citrus, but also the most difficult to grow. Planting is not easy because of the high costs and low returns. 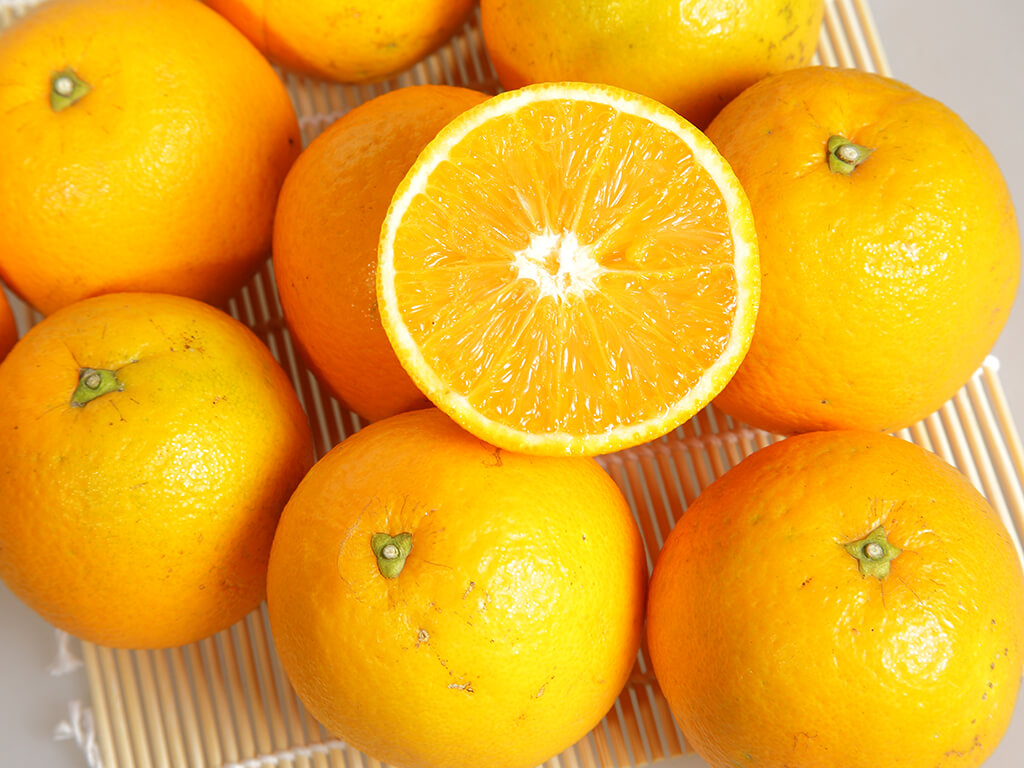 The Fragrant Orange, also known as the Valencia orange, is a sweet orange. Sourness and sweetness are its unique tastes with a rich aroma and juicy. The unique taste leaves a great impression. Taiyuan Valley near Donghe has both the climate and soil conditions suitable for the growth of the Fragrant Orange. Harvest time is from March to April each year. Come to Donghe. You will find it teeming with fragrant oranges and the tree’s blossoms all around. Aside from sampling fragrant oranges, you can also take a walk around Taiyuan Valley, and enjoy the beautiful mountains.

Every year from April to June, do not forget to try the flying fish feast!

The long coastline in Hualien and Taitung and with the Kuroshio (black tide) Current flows through the open sea and brings rich fish resources. It gives seafood cuisine an important role in East Coast cuisine. From Chisingtan to Yanliao all the way south to Shitiping, Chenggong fishing port and Fugang fishing port, each have some sort of seafood street with various signature dishes. Such as swordfish sashimi, flag fish balls, Manbo fish and red crab noodles. The cuisine is fresh, delicious and exotic enough to ensure a memorable meal! On Green Island, there are fried seafood dishes, garlic octopus and many more seafood dishes. Each is full of characteristics to impress you! Every year from April to June, do not forget to try the flying fish feast! Rice cakes made from peanut and rice milk with thickening basil are examples of rare local cuisine in Taiwan.

Millet is the traditional food of the indigenous people. They supplement it with sweet potatoes and taro. Due to the recent plantation of rice, most of them have changed their staple food to Chinese rice. Traditional millet has become only a staple food during festivals. Side dishes are generally vegetables accompanied with some meat and fish dishes.In terms of cooking skill, indigenous cuisine is mostly boiling and broiling. The Amis style of stone cooking is an interesting way of cooking. They put fish, shrimp, crab, vegetables and other ingredients into a boat shaped bowl made of betel leaves, then throw in red hot stones into the bowl and seasoning with salt. An original taste of the East Coast is in front of you! 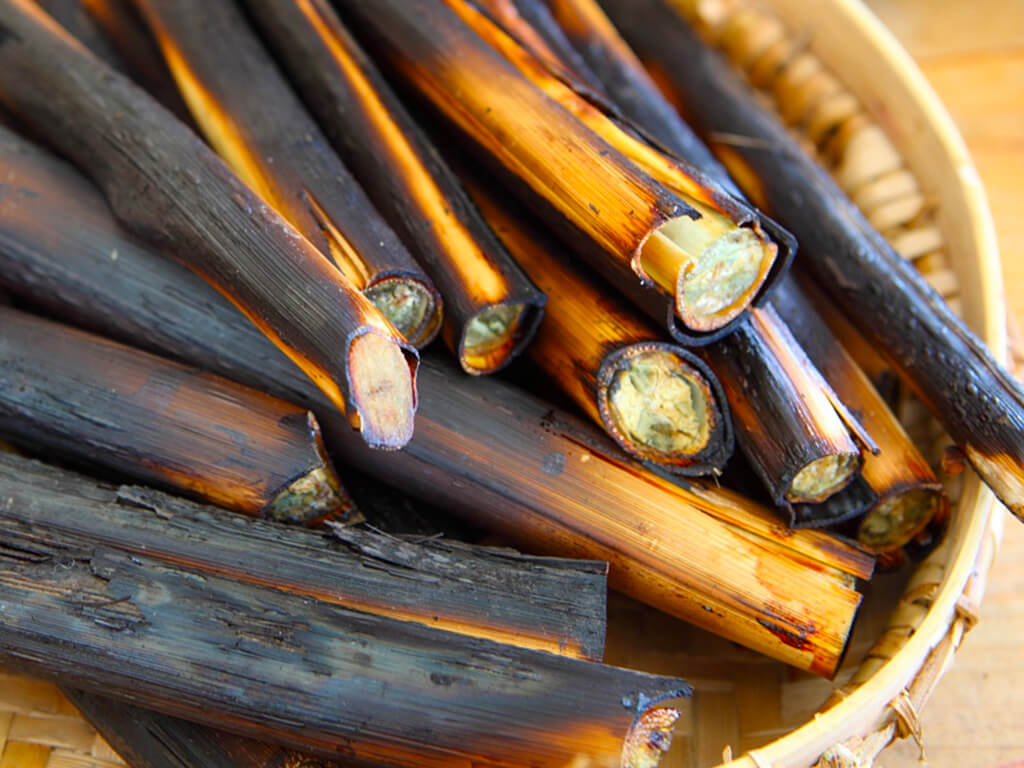 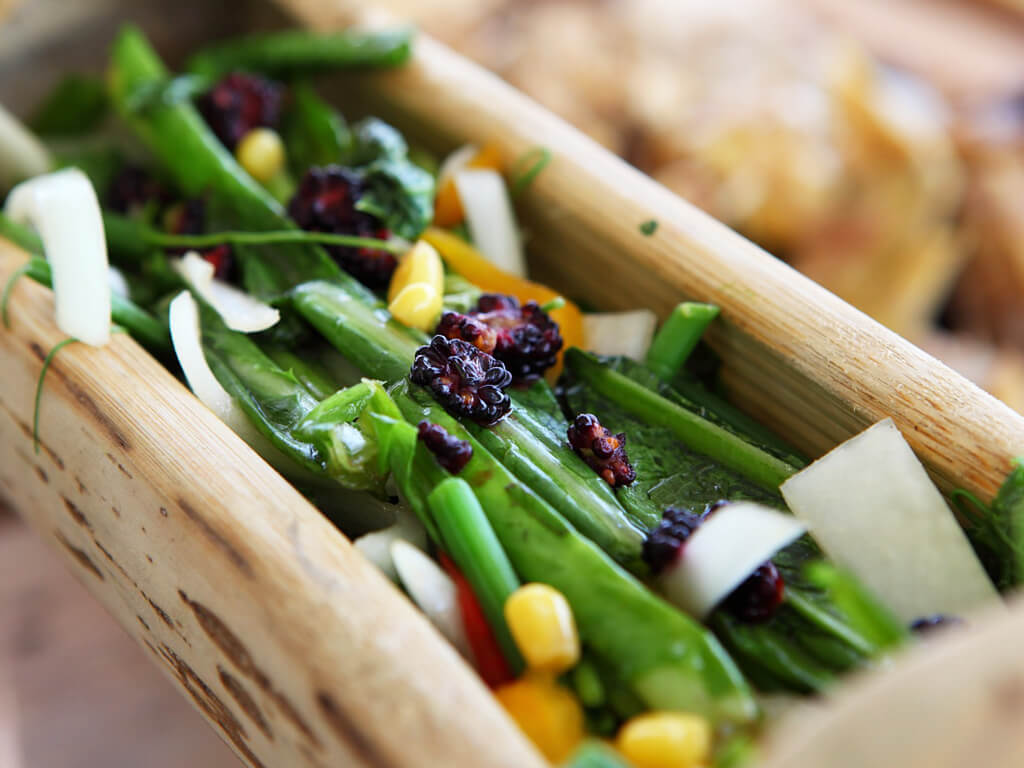 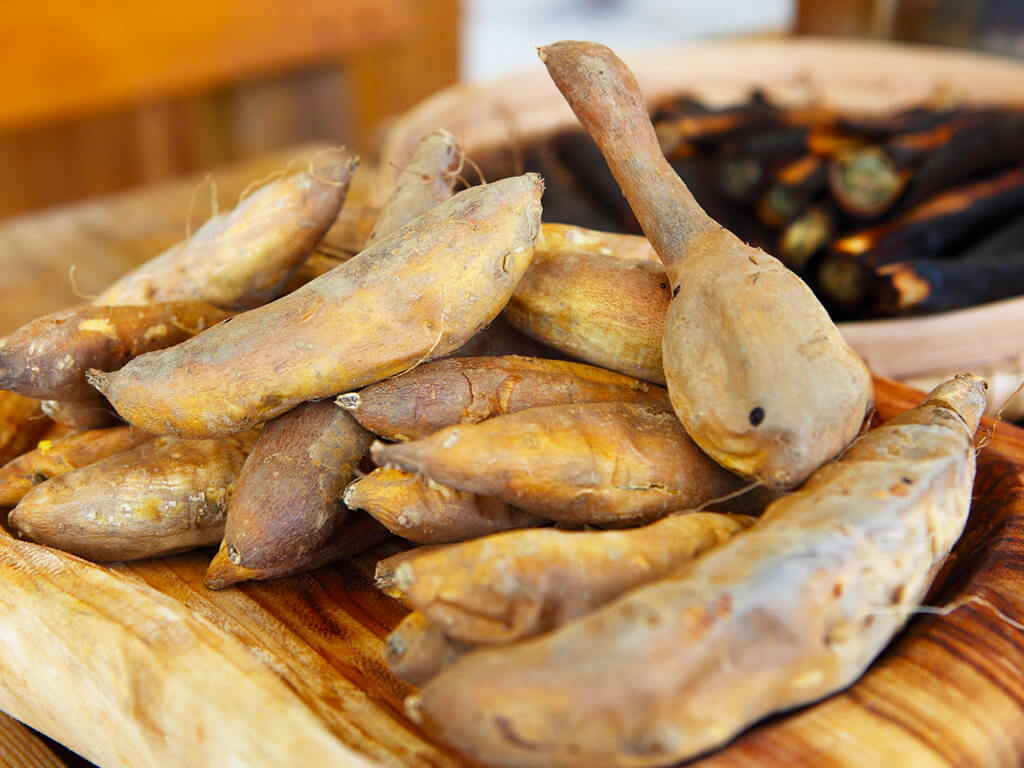 The stone cooking method of the Amis,1 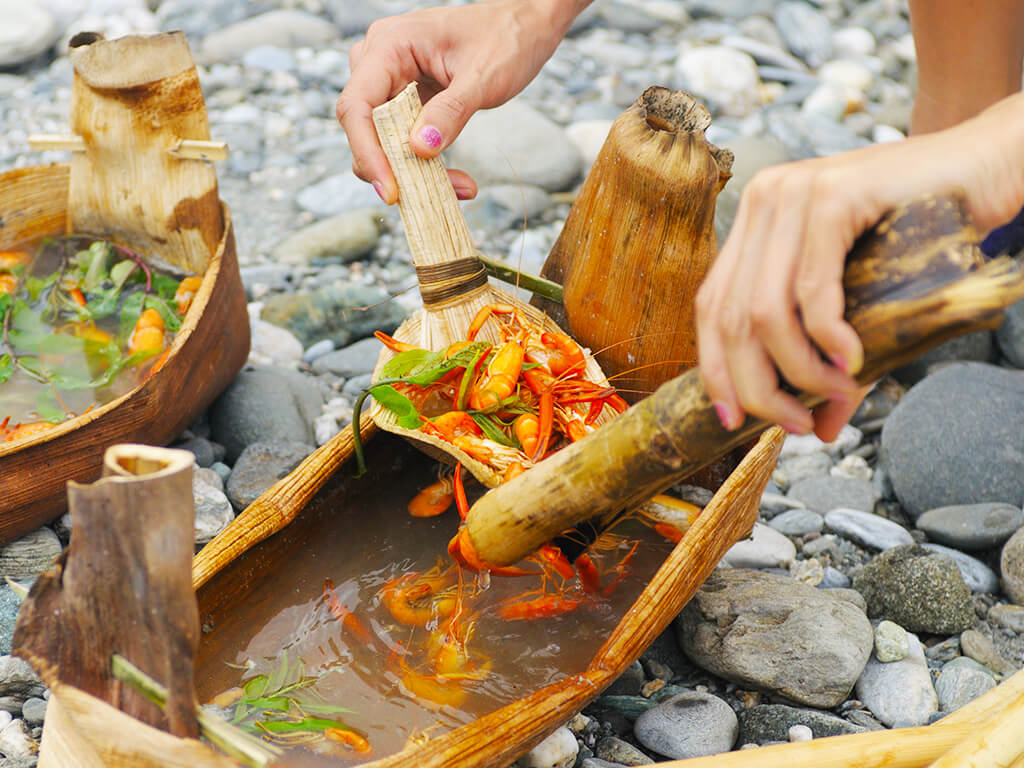 The stone cooking method of the Amis,2 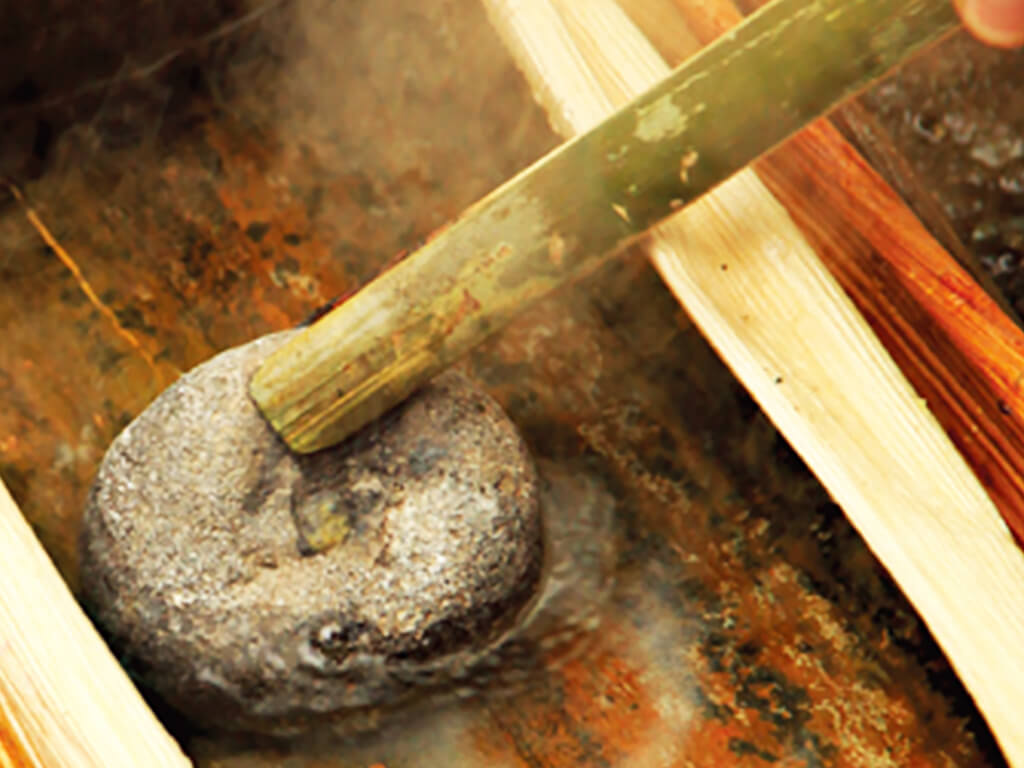 The stone cooking method of the Amis,3 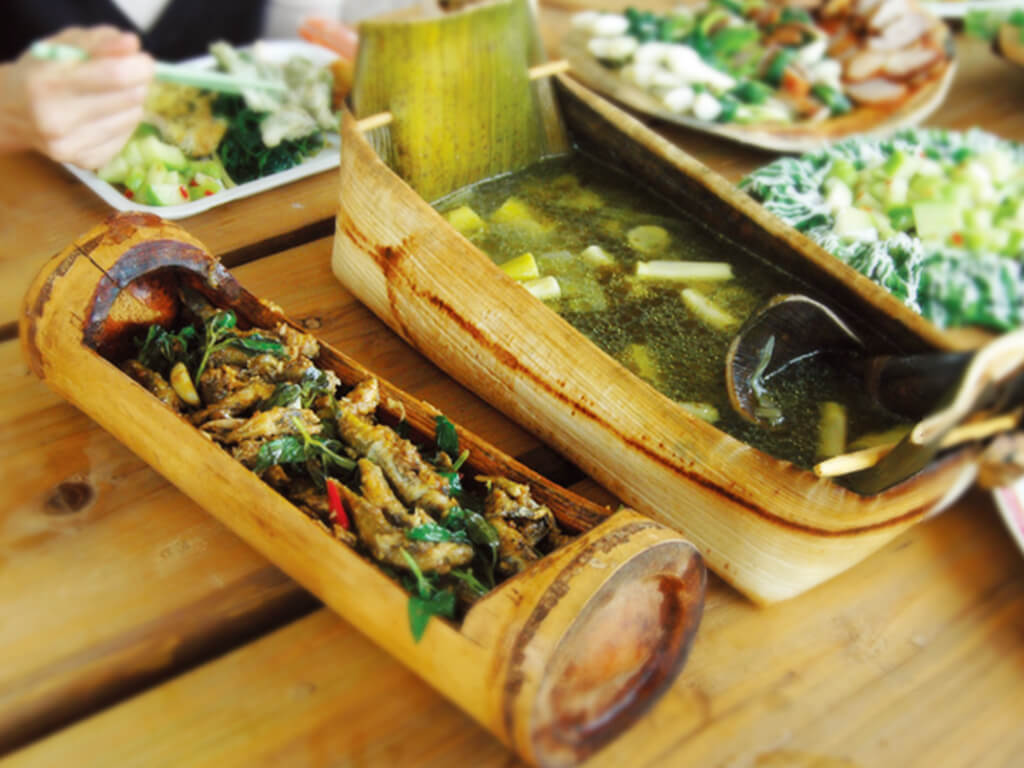 East Coast jade culture can be dated from the Beinan ruins, about 2000 to 5000 years ago, they unearthed a large number of jade objects, such as tubes, rings and pendants. In 1961, nephrite jade was found in the riverbed in Fengtian. Because of its fine quality, it is made into all kinds of jade ornaments and is sold all over the world. Since then, Fengtian has become a synonymous with jade in Taiwan and has created a brilliant chapter in Taiwan’s jade industry. Due to excellent geological conditions in the Coastal Range, many jade mines have been found, such as the colorful, warm and soft texture of chalcedony, and various shades of colored jade. The variety of jade offers a great choice for jade collectors. 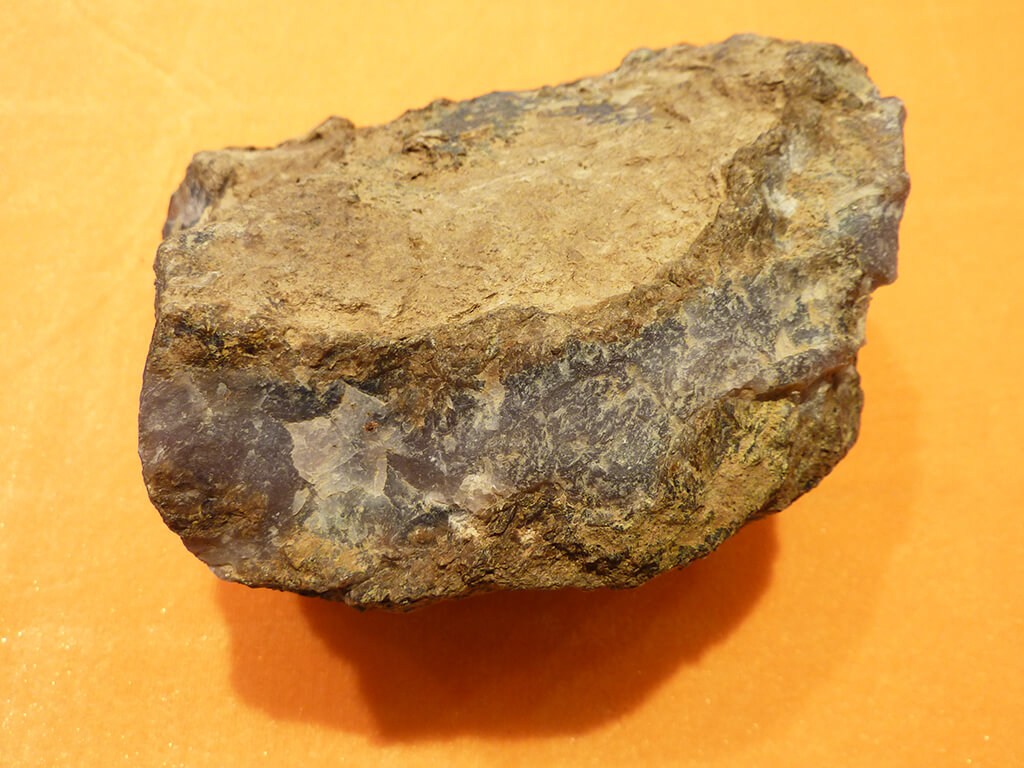 Purple chalcedony is found mainly in the area north of Donghe Town to the Hualian Fengbin coastline. The top-grade stone is deep purple, with no impurities. Its candle-like gloss and soft purple color display a natural beauty and it is a favorite of stone fanciers. 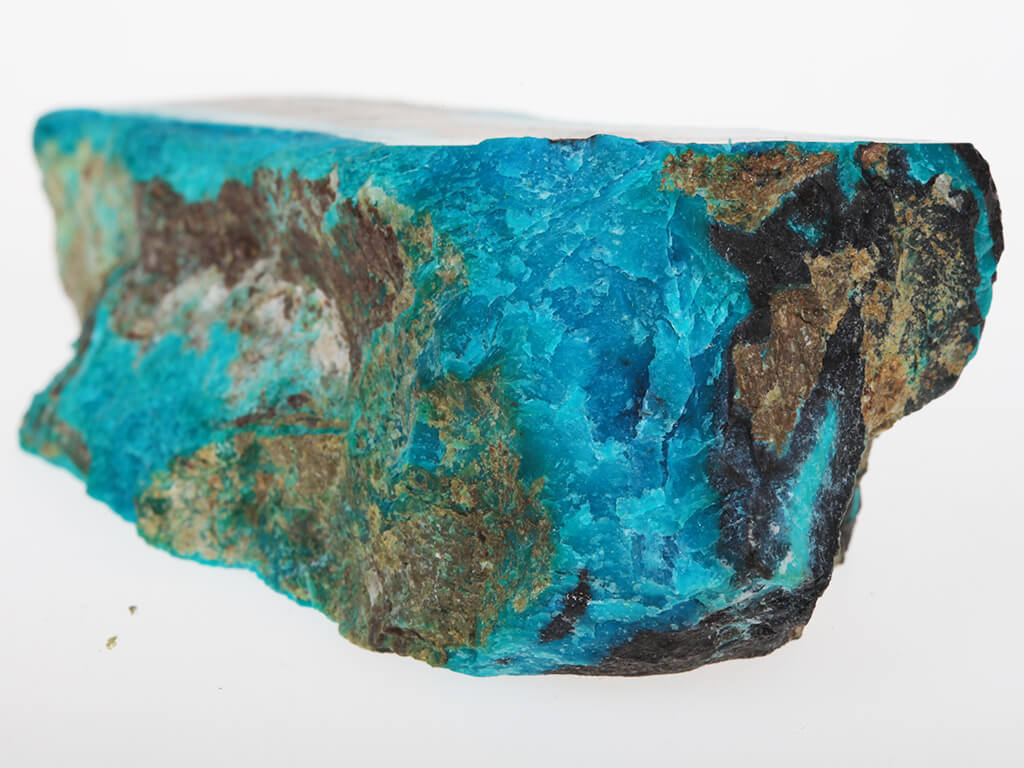 The sky-blue gem produced in eastern Taiwan is not a sapphire from the corundum family, but blue chalcedony, which belongs to the quartz family. It is composed of silica. As it contains copper from chrysocolla, it appears blue. It is the most expensive of Taiwan’s gem stones, and is also found in the U.S., Mexico and Chile. 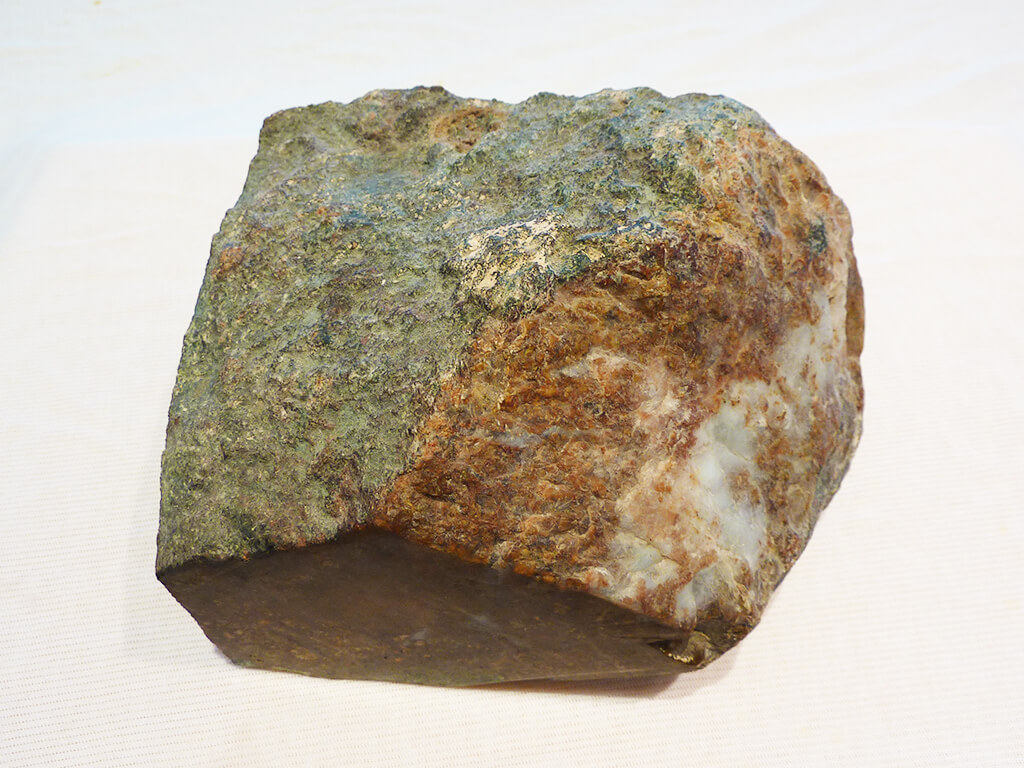 Flower jasper has a mixture of two or more colors. The colors are not bright, but occur in lines or clumps that may be black, white, red, purple, grey, or yellow. It has a hardness of between 6 and 7 degrees, and a specific gravity of 2.582. It is usually found along with blue chalcedony.The colors of flower jasper, affected by seepage, are different from those of blood trace jade, which feature interlocking lines. Experts favor it heavily. It comes from a branch of the south arm of the Mawuku stream and the Donghe Bridge river mouth. 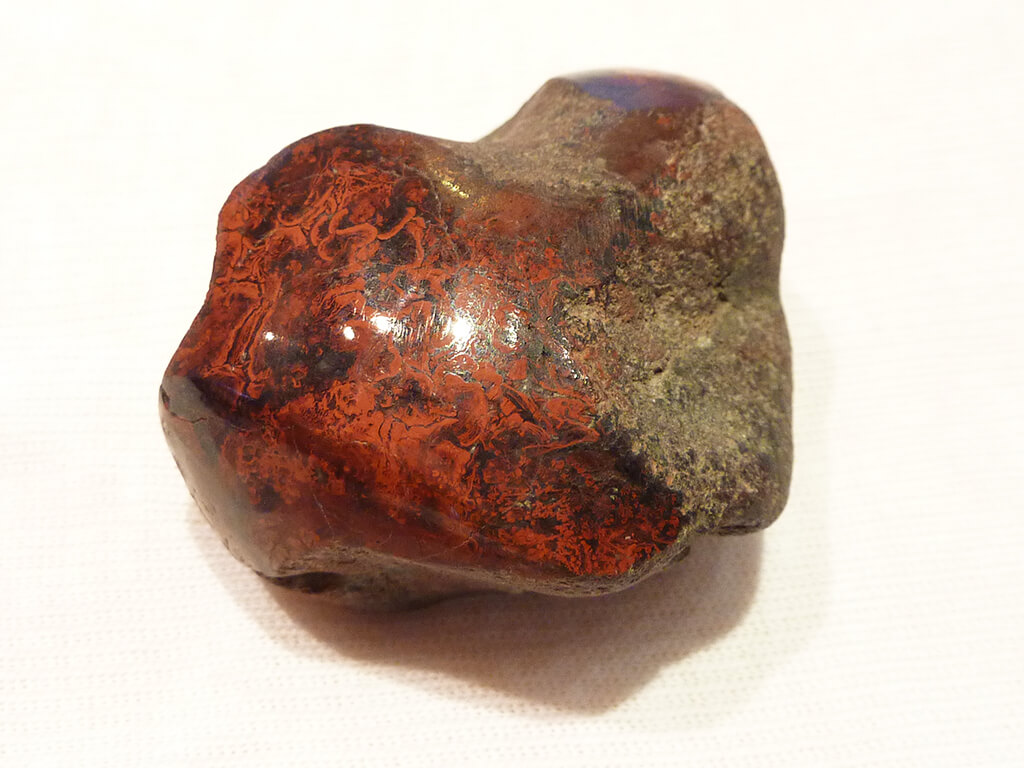 Dragon and phoenix jasper is called president stone or “Jieshih.” A semi-precious stone produced on the east coast, president stone is very rare and difficult to obtain.